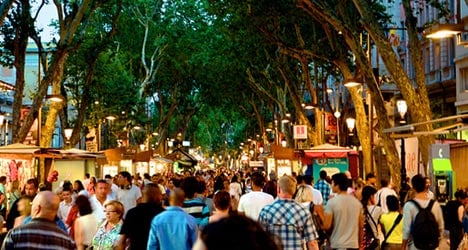 Figures released on Monday from Spain’s Ministry of Industry, Energy and Tourism have revealed that the huge rise in the number of people visiting Spain continues unabated.

According to the Frontur survey, 6.8 million tourists flocked to Spain in May alone.

The unprecedented boom in the sector shows no sign of slowing as 6.9 percent more Brits, 8.1 per cent more Germans and 11.1 percent more French people visited than in 2013.

Only Portuguese (0.59 million, down 2 percent) and American tourists (0.4 million, down 9.1 percent) came in lower numbers than last year, according to Spanish daily 20 Minutos.

SEE ALSO: The Local's gallery of Spain's best beaches for 2014

Spain’s Canary Islands experienced the biggest surge in incoming tourist traffic with a year-on-year rise of 13.1 per cent, followed by Andalucia with 10.1 per cent.

84 per cent of tourists arrive by plane and 66.5 per cent choose to stay in hotels.