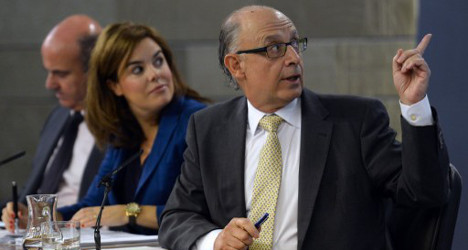 Prime Minister Mariano Rajoy's government, which faces elections in 2015, said Spaniards should reap the reward for their sacrifices during a period of deficit-cutting austerity, which has prompted mass street protests.

Spain's economy, the fourth-largest in the eurozone, is slowly recovering after emerging from five years of stop-start recession prompted by a 2008 property crash, but unemployment remains at 26 percent.

"The reform, after the efforts made by Spanish people confronted by the crisis, aims not only to compensate for those sacrifices but also to dynamise growth and job creation," Deputy Prime Minister Soraya Saenz de Santamaria told a news conference.

The proposed reforms will be published for public consultation before a final version goes to parliament, she said after a weekly cabinet meeting.

The corporate tax rate, meanwhile, would be trimmed from 30 percent to 28 percent next year and 25 percent in 2016.

The reforms come after the International Monetary Fund said in a report last month that Spain's economy had "turned the corner" and had room to cut its corporate tax rate.

"The time has come for lower taxes for everyone," Budget Minister Cristobal Montoro said.

"The time has come for the Spanish people to receive compensation for the effort they have made," Montoro added.

"The time has come to strengthen economic growth, dynamise savings and investment and as a consequence create jobs through a tax reform that lowers taxes, but mostly for those on medium and low incomes."

Spain's government decided not to raise sales tax, the deputy premier announced, except for some "very limited" adjustments for health-related products as required under European Union rules.

The IMF last month called on Spain to overhaul its 21-percent sales tax to gradually withdraw the reduced rates applied to items such as food, books, hotels and restaurants.