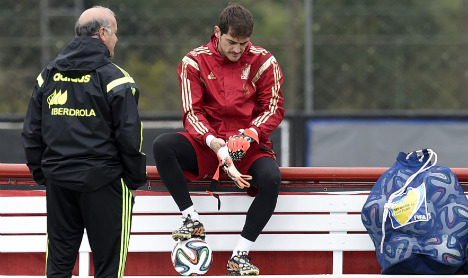 The reclusive state failed to qualify but state television has aired recordings of matches, which were drawing "great attention of football fans and televiewers", KCNA said.

"But it seems nothing can overpower the shock given to most of them due to the Spanish team's early exit," it said.

Yu Myong-Uk, an official of North Korea's football association, told KCNA he was "very surprised" at Spain's "disgraceful defeat" at the hands of the lower-ranked Netherlands.

"It seems to me that Spanish tiki-taka is going bankrupt", he said.

"The Spanish team's defeat gave me a lesson that it is most important to grasp the tactics of rivals and smartly counter them," Pak was quoted as saying.

"I will further study together with my trainees lessons and experiences gained in the on-going World Cup to put the training on a more scientific basis."

Many fans were sending messages or making phone calls to a sports daily in Pyongyang to express their feelings or propose creative opinions on developing the game in North Korea, KCNA said.

Reflecting the popularity of the sport, North Korea has released a set of postage stamps to mark the World Cup in Brazil, KCNA reported earlier this week.