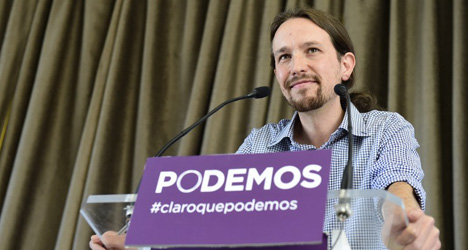 Podemos, the party fronted by university professor Pablo Iglesias, said of the exam, "We've made a lot of people nervous who are too used to privilege. We're going to keep on doing it." Photo: GERARD

In order to attain an "Extraordinary Baccalaureate Prize" for academic achievement in Badajoz, capital of the autonomous community of Extremadura in the west of Spain, students must pass an English exam.

But last Tuesday the exam paper contained an unusual exercise; after a description of the recent surge in popularity of Podemos, the left-wing political party, students were obliged to write a composition answering the question, "How would you convince a friend not to vote for Podemos?"

Podemos, whose name translates as "we can", romped to a surprise fourth place in May's European parliamentary elections on an anti-austerity platform.

Its success under the guidance of charismatic leader Pablo Iglesias has led to attacks from members of Spain's political establishment, who have compared Iglesias to figures ranging from Hitler to Fidel Castro.

Podemos posted a photo of part of the offending paper, taken by a student, on their website on Wednesday this week, alongside a translation and the comment, "We've made a lot of people nervous who are too used to privilege. We're going to keep on doing it." Extremadura's local government Education Council described the exam question as "inappropriate and unfair" but said that it "could not pre-emptively monitor teachers in the preparation of exams."

The question was condemned by the Extremadura Workers and Teachers Union (STE-Ext) who released a statement describing it as "completely unfair, biased and the reflection of a sick society."

"Many people are obviously nervous about the last European elections. But it is the responsibility of the administration of Monago [Extremadura's ruling right-wing Popular Party president], which certainly did not expect to have such a poor showing, that must ensure that this does not happen," it added.

Spanish daily Publico noted that the union have asked that the exam be considered null and void, "publically recognizing its unsuitability" and that re-sits should be organized.

The STE-Ext noted "The exam is one more example of the political ideology that they are trying to impose by force in classrooms."

It added, "This is the latest example but in recent weeks they have approved the Primary school curriculum adapted to the LOMCE [Spain's new education law] in which religious education classes have been increased to the maximum number permitted, two hours per week, the same as core subjects and more than foreign languages."