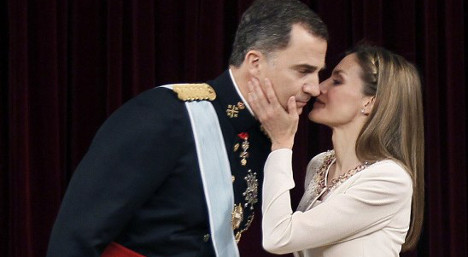 Letizia may have willingly surrendered a corner of her private life when being crowned queen of Spain on Thursday, but the former TV journalist has also, probably unknowingly, lost one of her fundamental rights as a married woman.

“If she tried, it would be blocked,” Verónica del Carpio, lawyer and Civil Rights academic, told Spanish online daily Público.

“If he filed for divorce, it would be granted to him without a doubt.”

Asked if she thought Felipe’s legal ‘upper hand’ would also mean a judge would grant him custody of their two daughters Leonor y Sofía, del Carpio replied “I’d rather talk with documents in my hand, but all the clauses of Felipe and Letizia’s marriage documents are secret.”

“All this does is show how absurd it is that some people are legally shielded in a civil manner.

“What does being king have to do with not having to pay a debt or being sued?”

Spain’s King Juan Carlos famously said “justice is the same for all” when referring to his son-in-law Iñaki Urdangarin and his alleged money laundering problems, but the ageing monarch is now also set to get the absolute immunity he had during his 39-year reign.

Spain’s ruling Popular Party presented an amendment in Parliament on Friday which if passed will grant Juan Carlos legal privilege so only theSupreme Court can hear cases against him.