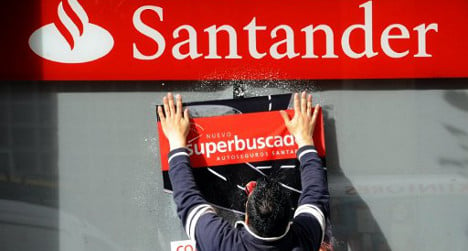 The union confederation claims that "bullying" and "veiled threats" by Santander management have made staff clinically depressed. Photo: Dominique Faget/AFP

The CCOO representative for the region's Santander employees, Núria Moreno, told local newspaper Viva Cadiz on Tuesday that the confederation had spent years trying to convince the bank's management that their sales strategies were "based on putting intolerable pressure on staff and the systematic lengthening of the working week, with the associated Social Security fraud."

She also mentioned the trimming of "thousands of jobs" and the "progressive deterioration" of working conditions in offices, resulting in worsening customer care .

Moreno described the strategies as "extremely bad for the staff and damaging to both the company and the health of its workers."

She claimed that 40 per cent of employees were taking antidepressant medication as a result of the daily stress and tension at work, according to local daily Andalucia Información.

Moreno and her union colleagues have already collected 1,030 signatures from people opposed to the bank's behaviour in 60 per cent of its offices in Andalusia in the hope of forcing changes in management policy.

"The constant deterioration of the working environment and excessive pressure on staff is not acceptable in a company that doubled its profits last year, earning €4.37 billion ($5.94 billion)while cutting 3,000 jobs, which are compensated for by extending the work week of those who are left," she said.

The current behaviour of the bank was, she said, "Concealed bullying, veiled threats, with a management style that does not assist but controls, and requires a report every two hours on how many sales have been closed. There is also the extra unpaid hours and an incentives scheme with targets that are impossible to achieve."