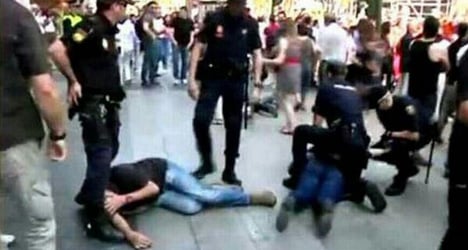 TV footage showed protesters crying that their freedom of speech was being repressed as they were bundled to the ground by police. Screen grab: YouTube

Republican groups had applied for the right to march through Madrid in protest against the enthronement of the new king of Spain on Thursday.

When permission was denied, they shifted their focus to a organizing a static demonstration in the city’s Puerto del Sol but this too was deemed illegal.

Authorities then went one step further and announced on Wednesday that anyone carrying a republican flag would be arrested, for security reasons, under laws designed to curb football hooliganism.

On the day of the enthronement, press reported that police were duly arresting anyone wearing pro-republican t-shirts or carrying flags. Some reports suggested that people were handcuffed for shouting pro-republican slogans and that others were questioned by police merely for wearing purple – the colour associated with republicanism.

TV pictures showed officers bundling people to the ground while witnesses cried that their freedom of expression was being repressed. Three arrests were made.

Europa Press agency reported that police had admitted that a “quite important” group of anti-monarchy protestors from the 15-M group, which organized massive anti-government demonstrations across Spain in 2011, had been detained for identification in order to “avoid possible incidents”.

"A man handcuffed in Gran Via for shouting in favour of republicanism as the royal entourage went past."

Newspapers reported that many people, knowing that more overt protests would be discouraged, turned their backs on the new King as he was driven past.