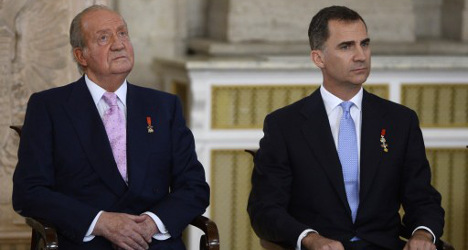 Felipe legally became king at the stroke of midnight (2200 GMT) as an act of parliament signed by his father came into force, formalising the end of 76-year-old Juan Carlos' 39-year reign.

A tearful King Juan Carlos sealed his abdication of the Spanish crown on Wednesday after a four-decade reign, leaving the throne to his 46-year-old son, Felipe VI.

The 76-year-old monarch signed the act of parliament ending his reign with a green and gold pen at a ceremony in Madrid's Royal Palace, then hugged his son, who will be sworn in on Thursday morning.

The embrace between the scandal-hit king and his heir under the palace's chandeliers marked the first royal succession in Spain's modern democratic history.

Dressed in a dark blue suit and pink tie, Juan Carlos, who uses a cane following several hip operations, stood unaided for part of the ceremony but briefly held Felipe's arm to steady himself.

A band struck up the national anthem as Felipe, his wife and future queen Letizia and Juan Carlos's wife Queen Sofia, applauded the abdicating king.

Juan Carlos is credited with helping guide Spain to democracy after the death of the dictator Francisco Franco in 1975, but his popularity was damaged by scandals in recent years.

Now Felipe is tasked with cleaning up the monarchy's image and soothing a country stricken by recession. Some are calling on him to unify Spain as the Catalonia region seeks independence.

Madrid was decked with red and yellow Spanish flags and white flowers for the soon-to-be King Felipe VI. Shops were selling T-shirts and fridge magnets with the faces of the new king and queen. The final page of the official government document sealing Felipe's accession to the throne.