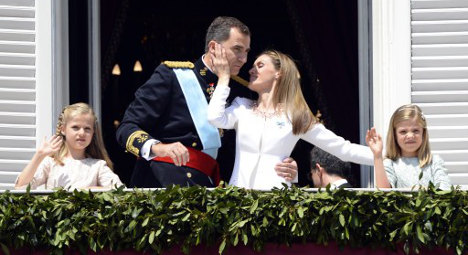 Thousands of Spaniards put aside their World Cup misery to line the streets, yelling "Long live Spain! Long live the king!" as the tall, 46-year-old former Olympic yachtsman stepped out of a black Rolls Royce in military uniform before entering parliament.

The cry soon went up inside the chamber as Felipe vowed before lawmakers to defend the people and constitution and pledged his "faith in the unity of Spain", where separatist tensions are high in the northeastern region of Catalonia.

"I swear to carry out my duties loyally, safeguard and ensure the safeguarding of the constitution and respect the rights of citizens and the regions," the monarch proclaimed.

"I begin my reign with great excitement at the honour of taking the crown, conscious of the responsibility that brings with it, and with great hope for the future," he told lawmakers.

Seated alongside him on a dais in parliament were his wife, the new Queen Letizia, 41, in a simple white knee-length dress and white jacket, and their blonde, blue-eyed daughters eight-year-old Leonor, who is now heiress to the throne, and Sofia, seven.

Outside, as police helicopters hovered above, officers closed off city-centre avenues and snipers deployed on roofs in a 7,000-strong security operation for the royal festivities.

Felipe leads a royal family tarnished by scandal after the 39-year reign of his 76-year-old father Juan Carlos, who signed his act of abdication with tears in his eyes at the Royal Palace the day before.

Now he must try to rally a people stricken by a 26 percent jobless rate and strained by secessionist stirrings in the northeastern region of Catalonia, which wants an independence vote on November 9.

"It feels like the end of a cycle," said Jose Antonio Gomez, who runs a soft drinks stall outside the old Royal Palace in central Madrid, where the new royals were to appear before the crowds on a balcony.

"The Spain team were a disaster and have to renovate," said Gomez, after defending champions Spain crashed out of the World Cup in the first stage after a shock 2-0 loss to Chile.

"Now it is good to have a new king. His father did it very well and Felipe knows how to solve Spain's problems: Catalonia, the crisis. At least I hope he does," Gomez said.

Felipe received the red silk sash of the military forces' captain general from his father before his swearing-in.

The royal couple were to ride in the Rolls-Royce from parliament through the streets of central Madrid to the old Royal Palace.

There, they will be accompanied by the former King Juan Carlos and Queen Sofia as they appear on the balcony to wave to crowds below before holding a reception for 2,000 guests.

In keeping with Spain's tough economic times, festivities remain restrained, however, compared to other European royal coronations and no foreign dignitaries have been invited.

On Wednesday, a teary-eyed and infirm Juan Carlos, dressed in dark suit and pink tie, ended his reign with a stroke of a golden pen in the vast, tapestry-clad Hall of Columns in the Royal Palace.

Juan Carlos, who walks with a cane after repeated hip operations, hugged Felipe under the palace's huge chandeliers, and briefly gripped his son's arm to steady himself in his final act as monarch.

The former king earned broad respect for guiding Spain to democracy after the death of General Francisco Franco in 1975 and for appearing on national television to thwart an attempted military coup in 1981.

But he outraged public opinion in 2012 when he went on a luxury African elephant-hunting safari as Spaniards suffered at home from a biting recession.

Cristina's woes could present the first major challenge to Felipe, as an investigating judge in Palma de Mallorca ponders in the weeks ahead whether to send her to trial.

But even as others in the family suffer falling approval ratings, Felipe's popularity has actually climbed.

Indeed, a poll taken after Juan Carlos announced his abdication to a surprised nation on June 2 showed almost 77 percent of respondents had a good or very good opinion of his son.