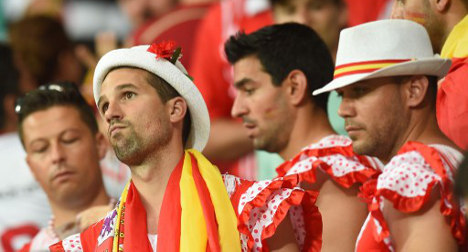 Spain's potential defeat against Chile on Wednesday would not only be heart-breaking for supporters of ‘La Roja’, it would also mean many spend less on celebratory drinks, food and merchandise.

Price comparison website Kelisto.es has valued the possible loss to the country’s retail industry at a staggering €600 million.

If that figure seems inconceivable, keep in mind that €386 million have already been spent since the tournament began last week, even though Spain suffered a crushing 5-1 defeat against group rivals Holland.

“In Spain, where 54 percent of people over 15 are self-proclaimed football fans, a sporting event like Brazil’s World Cup can have a huge impact on consumption,” Kelisto spokesperson Celia Duran has announced.

If Spain do make it through the group stages and into the last sixteen round, retail earnings will be around €515 million.

If they go on to lift the trophy, the figure will reach nearly €1 billion, equalling an average €21 per Spaniard.

According to Kelisto, Spaniards are spending most of their ‘World Cup’ money on TVs, food and drink.