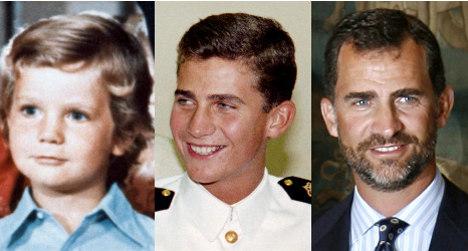 Photo: AFP
Tonight is the last time that Felipe Juan Pablo Alfonso de Todos los Santos de Borbón y de Grecia will go to sleep as a prince.
Tomorrow, the 46-year-old Prince of Asturias will sit on a large, expensive chair and be crowned King Felipe VI of Spain.
Felipe was born in Madrid during the Franco dictatorship but was not automatically heir to the throne until his father became king after Franco died.
He attended high school in Ontario, Canada, learning perfect English before returning to Madrid to complete a Law degree.
CLICK HERE THE BEST PHOTOS OF PRINCE FELIPE'S LIFE
As well as travelling on state visits to countries all over the world, Felipe has represented Spain in the 1992 Olympic Games in Barcelona as a member of the sailing team, following a family tradition.
Tall, handsome, cultured, and rich, Felipe was long considered one of Europe's most eligible bachelors and was romantically linked with a number of women, including a Norwegian underwear model, before eventually settling down with TV journalist  Letixia Ortiz.
Take a look at the Local's gallery of Felipe through the years and don't miss tomorrow's thrilling live coverage of the royal enthronement.