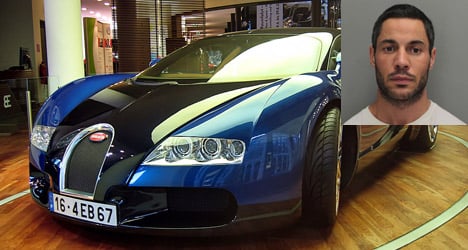 Madrid-born Alvaro López Tardón, 39, is said to be the leader of a drug ring known as "Los Miami" but could now face up to 20 years in prison.

The jury heard how he bought 13 high-priced properties,  including a $1.2 million penthouse, by funnelling cash through a shell company.

Details of a personal spending spree were also disclosed,  which US District Attorney Tony Gonzales described as "mind-boggling".

López Tardón bought 17 sports cars, including a Rolls-Royce, a Bentley, an Aston Martin, a $1.2 million Bugatti Veyron and a black Ferrari Enzo worth almost $1 million.

His lawyer argued that the money had come from "legitimate businesses" in Spain, including a family-owned car dealership and a gourmet delicatessen, and cited Spanish tax records, according to US daily the Miami Herald.

But jurors were unconvinced and returned guilty verdicts on a conspiracy charge plus thirteen money-laundering charges at the end of the six-week trial.

Sentencing has been scheduled for August 19th.

López Tardón was investigated and arrested by the FBI in 2011 after his priest was caught smuggling cash into Miami.

His former partner, David William Pollack, was a key witness for the prosecution and admitted smuggling cocaine into Spain from Peru while his former girlfriend admitted using cocaine profits to buy property. Both pleaded guilty in 2012.

Prosecutors revealed that López Tardón had threatened to kill his ex-wife in 2011 when she refused to help his extend his "green card" to retain US residency.

She testified against her former husband and told jurors that she had spent over $200,000 on plastic surgery.

Other alleged crimes committed by the drug baron included an attempt to murder a Spanish policeman in a nightclub in 2003, and ordering two "hits" on people in Spain.

Alvaro's brother, Artemio, was also charged but could not attend the trial because he is currently facing  drug-trafficking charges in Spain.