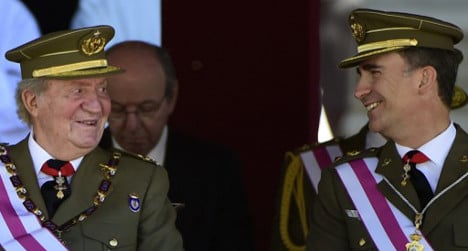 The modification of a 1967 decree by Spain’s Cabinet of Ministers will mean Prince Felipe will hold the title of King of Spain along with his father. Photo: Pierre Marcou/AFP

Just three days after Spain’s MPs overwhelmingly approved King Juan Carlos’s abdication, the country’s parliament is now also likely to vote in favour of allowing the 76-year-old outgoing monarch and his wife Sofía to keep the titles king and queen.

Friday's modification of a 1967 decree by Spain’s Cabinet of Ministers will mean Prince Felipe, likely to be officially enthroned on Thursday 19th June, will hold the title of King of Spain along with his father.

His daughter Leonor will become known as Princess of Asturias, a title her mother Letizia currently holds.

The eight-year-old is currently known as an Infanta, a title which she shares with her aunts Elena and Cristina and that usually applies to princes and princesses that aren’t directly in line to inherit the throne.

Leonor, who is set to undergo military training so she can one day become the country's commander-in-chief, has faced opposition from residents of the Catalan town of Cervera.

The council, dominated by Catalan nationalist groupings CiU and ERC, voted on Thursday in favour of a motion asking Spain’s Royal Palace to strip the young monarch of her title of Countess of Cervera. The palace is under no obligation to take account of the vote.

Both nationalist Catalan parties voted against the King’s abdication in Parliament on Tuesday, representing the views of many people in the region who would rather become a republic.