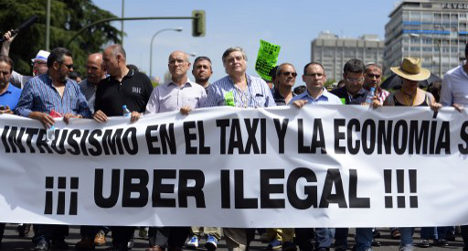 Taxi drivers protest in Madrid on Wednesday against the app Uber which they believe creates unfair competition for their services. Photo: AFP

Taxi drivers in Spain joined their counterparts across Europe on Wednesday in protests  against the app which connects drivers with passengers seeking a ride.

Wednesday's strikes in Madrid and Barcelona went off without major incident. But Spain believes the European Commission must now intervene in the matter and "clarify this subject as much as possible", sources from the country's public works and transport ministry told national daily El País.

Those sources also said EU rules for platforms like Uber needed to be as "homogenous" as possible.

European Vice President Nellie Kroes on Wednesday came out strongly against the protests: "Innovators can't sit around waiting for permission that never comes," she tweeted.

"Entrepreneurs disrupt, it's what they do, and our economy needs them. Ignoring them, banning them or striking won't help us manage disruption," she said.

"We need to work with tech not against it, it's not the enemy."

This response is unlikely to please authorities in Spain, where legal chaos threatens.

On Monday, the public works and transport ministry said it would fine users of Uber up to €600 ($800) and then backtracked on Tuesday after the EU said the measure was extreme.

Authorities in Catalonia, meanwhile, have announced fines of up to €6,000 for drivers who use Uber to connect with passengers.

Taxi drivers in Madrid are saying they may strike again on July 1st, El Mundo reported on Thursday.