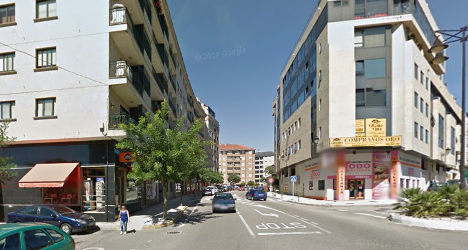 The street in the Galician town of Ponteareas where the body was discovered. Image: Google Maps

The landlord in Galicia's Pontevedra province visited the tenant chasing up three months in unpaid rent.

When the tenant didn't open the doorbell, the landlord used his own keys to enter the apartment, local daily La Voz de Galicia reported.

The flat appeared to have been unoccupied for several months. Inside however, the property owner found a freezer tied up with chains.

He then contacted authorities who opened the freezer to discover the dismembered body of a man between the ages of 30 and 50 years old.

On the same day as that discovery, the family of a Venezuelan man who disappared in March came forward to police now believe it could the remains be their missing relative.

Police are now treating the missing tenant of the property as the prime suspect in the murder.

An autopsy is to be carried out to determine the cause of death.