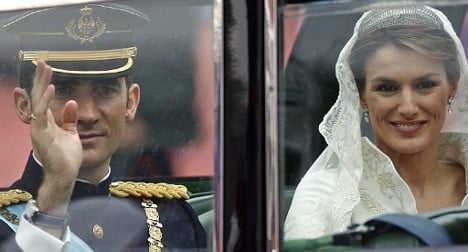 The new monarchs will greet wellwishers through the streets of Spain’s capital as they make their way from the Parliament to the Royal Palace. Photo: Cristina Quicler/AFP

The initially austere approach was aimed at silencing critics of Spain’s monarchy, especially with regard to the expense of an official royal ceremony in the crisis-hit country.

However, representatives of the Royal Palace, the Spanish Parliament and the government met on Wednesday to decide on the final protocol for an enthronement ceremony expected to be held on Thursday the 19th of June.

Jesus Posada, Spain’s speaker of the house, told Members of Parliament on Tuesday that there will be a military parade and official reception following Felipe VI’s enthronement.

The new monarchs will greet wellwishers through the streets of Spain’s capital as they make their way from the Parliament to the Royal Palace.

Felipe and Letizia completed a similar route, although in reverse, when they were married in 2004.

After the ceremony the prince and his wife, the new Queen Letizia, are likely to visit neighbouring France, Morocco and Portugal, according to AFP.

King Juan Carlos shocked Spain on Monday the 3rd of June when he handed a letter of abdication to the government, which was approved by landslide in the Parliament on Wednesday.

There were however a handful of small left-wing and nationalist parties which opposed the bill and called for a referendum on the monarchy.

A  survey by centre-left daily newspaper El Pais showed that nearly two-thirds of Spaniards, 62 percent, believe a referendum should be held "at some point" to decide whether Spain should continue to have a monarchy.