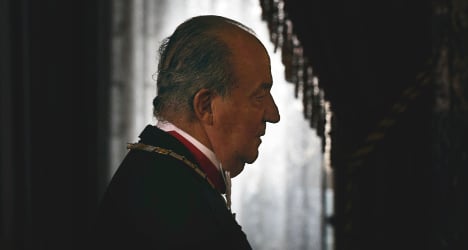 Spanish King Juan Carlos enters the Throne Room for a welcome ceremony before a gala dinner for Mexico's President at the Royal Palace in Madrid on Monday. Photo: Daniel Ochoa de Olza/Pool/AFP

Prime Minister Mariano Rajoy predicted on Tuesday that "a great majority of lawmakers" would vote in favour of a law approved by his cabinet last week allowing the 76-year-old king to step down.

The bill has the backing of the ruling conservative Popular Party and the main opposition Socialists as well as the small centrist UPyD party which together have 300 seats in the 350-seat lower house of parliament.

Rajoy will defend the law during a debate in the assembly which is scheduled to get underway at 9am, with the vote expected several hours later.

The Spanish leader also stressed on Tuesday that the debate had "only one objective, the abdication", and that it would not be about whether Spain should be a monarchy or a republic.

The law will also have to be approved by the Senate, Spain's upper house of parliament, which will vote on it on June 17th.

Felipe, a 46-year-old former Olympic yachtsman, is then expected to be sworn in at a ceremony in two days later, although the date will only be officially finalized after the abdication law is approved.

Small left-wing and regional parties, including the United Left (IU) coalition and the Catalan separatist Catalan Republic Left (ERC), will vote against the law and instead call for a referendum on the future of the monarchy.

"The right of blood can't come above the people's democratic rights," United left leader Cayo Lara said Saturday during a demonstration in Madrid to demand a referendum on the future of the monarchy.

The vote on the abdication law has also rattled the Socialist party.

Party leader Alfredo Perez Rubalcaba, who announced he was stepping down after the Socialists did poorly in last month's European parliament elections, backs the succession law.

But three Socialist lawmakers have asked for a free vote on the law.

Socialist party spokeswoman Soraya Rodriguez reminded her party's lawmakers on Tuesday that they had to vote as a bloc in favour of the abdication law.

Other parties, such as the conservative Catalan nationalist Convergence and Union (CiU party), plan to abstain from voting.

"We want to give the opportunity for the majority of citizens who want to decide who their head of state is," the United Left's number two, José Luis Centella, said Tuesday.

Within hours of the king's announcement on June 2nd that he was abdicating, thousands of people massed in central Madrid and other cities to demand a referendum on the monarchy, which was only restored in Spain in 1975 after the death of dictator General Francisco Franco.

Anti-monarchy activists are planning to demonstrate outside parliament as it debates the abdication law on Wednesday.

A majority of Spaniards, 62 percent, want a referendum on the future of the monarchy at some point, according to a Metroscopia poll published Sunday in top-selling centre-left newspaper El País.

If such a plebiscite were held, nearly one voter in two, or 49 percent, would prefer to have a monarchy with Felipe as king while 36 percent would support a republic, according to the poll.

A separate survey by Sigma Dos published by centre-right newspaper El Mundo on Monday found popular support for the monarchy has climbed since Juan Carlos announced his abdication.

Overall, 55.7 percent said they wanted Spain to remain a monarchy, up from a historic low of 49.9 percent when the same question was posed in January.

Juan Carlos was widely respected for smoothing Spain's transition to democracy after Franco's death, most famously appearing on national television to halt an attempted military coup in February 1981.

But gaffes and a corruption scandal centred on his youngest daughter Cristina and her husband Inaki Urdangarin have diminished his popularity in recent years.

Support for the monarchy is weakest among younger Spaniards, who do not recall the king's role in the steering Spain to democracy and who bear the brunt of Spain's sky-high 26 percent jobless rate.

Felipe urged Spaniards to unite for a better future during his first speech since his father announced his abdication, in what was seen as a reference to growing independence drives in Catalonia and the Basque Country.

Unlike when Juan Carlos was proclaimed king in 1975, no foreign dignitaries have been invited to witness Felipe accede to the throne and there will be no religious service.