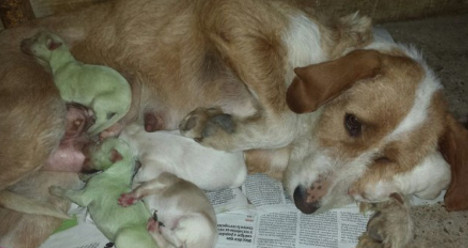 The animals, born on June 3rd, were smaller and weaker than the other pups in the litter. Photo: Aida Vallelado Molina

"I couldn't believe it when I first saw them," Aida Vallelado Molina told The Local.

"I thought the puppies were dirty and tried to clean them, but the colour wouldn't come off," said Molina, who breeds hunting dogs with her father in the town of Laguna de Duero.

The animals, born on June 3rd, were smaller and weaker than the other pups in the litter. One of them, a female, died shortly after birth while the male pup is still alive, but very weak.

He is now beginning to lose his pigment.

The cause of the death of the dead puppy, and the reason for its odd colouring, are now being investigated by local vet Daniel Valverde.

"There are no other recorded cases of this happening in Spanish scientific literature," he told local newspaper Laguna al Día after contacting Madrid's Complutense University.

Valverde is now carrying out virological and bacteriological tests to try and find an answer.

The two Spanish puppies are not the first reported examples of green pups. In 2012, the UK's Daily Mail ran a story about a green Labrador puppy born in England. That dog lost its colour around ten days after birth.

The cause for the colouring was given as exposure to a substance called biliverdin, which can be found in the placenta.