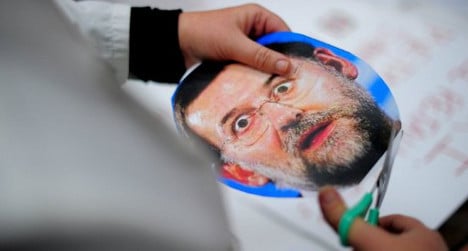 A cut-out image of Spanish Prime Minister Mariano Rajoy to be used in a protest against medical cuts in the country. File photo: Josep Lago/AFP

Rajoy will speak in parliament to defend draft legislation which will formalize the abdication of King Juan Carlos and pave the way for Spain's Crown Prince Felipe to become the monarch.

While earlier reports suggested the job of defending the bill would fall to someone else, a spokesperson for the ruling party confirmed on Tuesday that Rajoy would do the honours.

"It's logical given the importance of the debate that the Government's position will be defended by the prime minister," said the spokesperson.

Other parties will be given five minutes to give their view.

The vote itself is expected to be a mere formality with around 90 percent of MPs, including those from Spain's two major parties, expected to rubber stamp the legislation.

But the left-wing Izquierda Unida party have said they won't support the bill while the ruling Catalan nationalist coalition Convergence and Union (CiU) and the Basque Nationalist Party (PNV) say they will abstain.

King Juan Carlos's recent abdication has sparked pro-republican protests in Spain while a recent poll suggested some 62 percent of Spaniards want a referendum on the future of the monarchy.