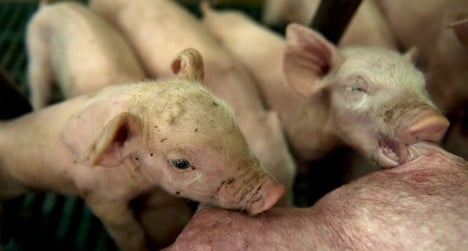 Initial studies which looked at the sows and the semen employed to artificially inseminate the females found no evidence of disease or malformation. Photo: Emily Watbisch/AFP

Analytical chemist Cristina Nerín has been investigating the reasons why 41 pig farms in Spain experienced a sudden drop in litter numbers in 2010, with many of their animals unable to reproduce at all.

Initial studies which looked at the sows and the semen employed to artificially inseminate the females found no evidence of disease or malformation.

Nerín, from the University of Zaragoza, then looked at the plastic bags used for semen storage by all the ‘infertile’ farms.

An expert in the study of packaging materials, Nerín has determined there is a relation between the chemical compounds in the plastic bags and the animals’ “reproductive failures”, more specifically damage to the sperm’s DNA.

More worrying still is that these toxic chemicals are often used in packaging food for humans like crisps and sliced meat, and are known to migrate into food.

"(It) shows the real risks we face," Nerín wrote in the study published in the journal scientific reports.

A previous lab study conducted in Germany looked at the effect of 96 endocrine disruptors on human sperm, found in chemicals which they claim are “omnipresent in food, household and personal care products.”

Scientists found the tails of the sperms tested changed in shape, especially when exposed to chemicals used in sunscreens, plastic-softening phthalates used in food, toothpastes, soaps and toys.

“The sperm cells may have more difficulty in sensing where the egg is," physician Niels Skakkebaek also wrote in the study.