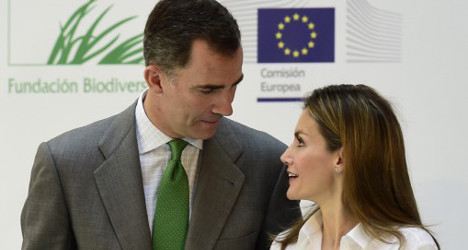 Spain's new king-in-waiting, Prince Felipe (L), listens to his wife Letizia during the European Business Awards for the Environment ceremony at the Ministry of Agriculture, Food and Environment in Mad

Felipe, 46, is to take the crown following his increasingly unpopular father Juan Carlos's announcement on Monday that he is abdicating as king after a historic four-decade reign.

"In Spain it is the tradition that abdications and proclamations of a king take place before the people's elected representatives, the members of parliament and senators," a palace spokesman told news agency AFP.

"In principle, foreign delegations will not take part," he said. A military parade is planned but no religious coronation service.

"We have very little time, and there is no room in the benches of the lower chamber (of parliament)," a Royal Household spokesperson told El País on Thursday. "We aren’t going to make people come just to leave them outside."

Spain's royal palace was unable to confirm the exact date of the proclamation of King Felipe when contacted by The Local.

After the ceremony the prince and his wife, the new Queen Letizia, are likely to visit neighbouring France, Morocco and Portugal, according to AFP.

King Juan Carlos shocked Spain on Monday when he handed a letter of abdication to the government, which has now drawn up an act of parliament to bring it into force.

The lower house of parliament is scheduled to vote on that bill on June 11th and the Senate the following week around June 18. If it is passed by both houses, Felipe can then be sworn in straightaway.

The tall former Olympic yachtsman ascends to the throne as Spain struggles with a 26-percent jobless rate, a push for independence in the Catalonia region and noisy protests by those who want a republic.

Pro-republican groups have called for a demonstration in Madrid on Saturday to demand a referendum on the monarchy.

Spain's main political forces, the ruling Popular Party and opposition Socialists, back Felipe's succession however and are expected to speed it through parliament.