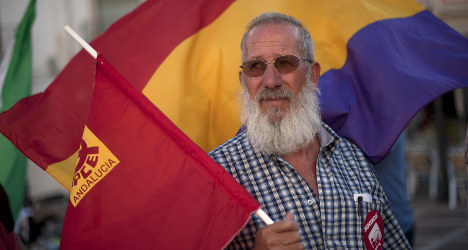 People attend a pro-republican demonstration after King Juan Carlos of Spain renounced the throne after 39 years as King on Monday. Photo: Jorge Guerrero/AFP

Groups including the key Izquierda Plural group, the environmental party Equo and the green-left Compromís coalition signed the declaration which pushes for a referendum that would see Spaniards voting on whether Spain would be a constitutional monarchy or a republic.

The so-called Atheneum Declaration — named for the Madrid cultural centre where it was signed — comes in the wake of the decision by Spain's King Juan Carlos to abdicate.

The surprise announcement on Monday sparked pro-republic protests across Spain, where many do not support the monarchy.

"The serious economic, social, environmental situation which our country is living through has given rise to the abdication of the monarch and the rapid attempt to impose another king on the people, without taking the will of those people into account," the new declaration begins.

Its authors also highlight the fact that 70 percent of people in Spain hadn't been of legal age to vote when the country's current 1978 constitution was approved. In that document, which spelled the end of nearly 40 years of dictatorship under Francisco Franco, the King is the Head of State and the country a parliamentary monarchy.

The parties signing the document have also vowed to support pro-referendum demonstrations such as those planned for this weekend across Spain, national free daily 20 minutos reported.

The Atheneum declaration, however, could remain largely symbolic.

Spain's Prime Minister Mariano Rajoy on Tuesday said any referendum on the future of the monarchy would require a change to the constitution.

This complicated process is unlikely to take place as an overwhelming majority of Spain's MPs are set to pass the legislation required to make Juan Carlos's son Felipe the next king of Spain.