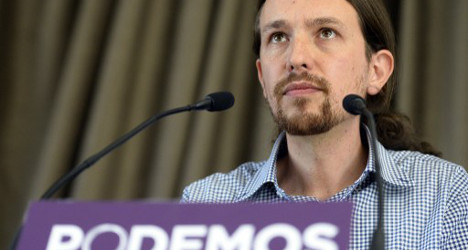 A coalition of over 50 anti-monarchy groups, the State Republican Board, is planning to stage a protest on Saturday in Madrid and several other cities to press the government for a popular vote.

Within hours of the 76-year-old king's announcement Monday that he was abdicating in favour of his son, thousands of people massed in central Madrid and other cities to demand a referendum on the monarchy.

"Our people will be at the protests that will take place," said Pablo Iglesias, the leader of a new left-wing party, Podemos, which took 8.0 percent of the vote in the European parliament election last month.

"We want to give the word to the people. What is the problem with having a referendum, and what is the problem if the Spanish people have the right to decide what should be our future?" he told a news conference.

Republicans also plan to protest outside parliament when it votes next week on legislation to bring into force Juan Carlos's abdication.

The legislation is backed by Spain's two main political parties, the ruling Popular Party and the Socialist Party, and is sure to pass.

Republican sentiment remains widespread in Spain, which only restored the monarchy in 1975 after the death of General Francisco Franco.

Prime Minister Mariano Rajoy has rejected calls for a referendum on the monarchy.

He argues that Spain's 1978 constitution, which established a parliamentary democracy with the king as a mostly ceremonial head of state, was supported by a great majority in a referendum at the time.

Despite having been officially formed just four months ago, Podemos, whose name means "We Can", stormed past older opposition groups to become Spain's fourth most-voted-for party in the EU elections and take five seats in the European parliament.