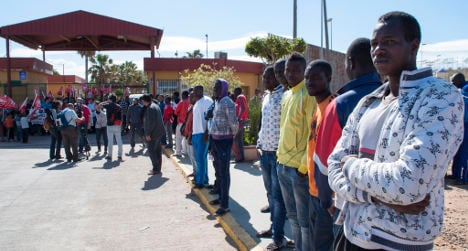 Would-be immigrants outside the Centre for Temporary Stay of Immigrants (CETI), following a morning assault in Melilla, on May 28th. Photo: Jesús Blasquez/AFP

Madrid has for months appealed for more EU aid to help it contain a surge in the arrival of sub-Saharan African migrants at the two cities, which are both on Morocco's Mediterranean coastline and have Europe's only two land borders with Africa.

The money will come from the EU's emergency fund and it will be used on "some of the 26 projects proposed by Spain to face the situation in Ceuta and Melilla", the statement added.

Part of the funds will be used to strengthen border fences, fund voluntary return programmes for migrants who manage to enter the two territories illegally and make improvements to government-run migrant reception centres.

A reception centre in Melilla is built to house 480 immigrants but now houses over 2,000 people.

Spain's interior minister on March 4 estimated there were 40,000 migrants waiting to cross from Morocco into Ceuta and Melilla.

Another 40,000 were waiting to enter Morocco from Mauritania en route to the two cities, he added.