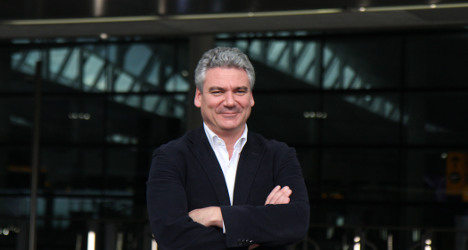 Spanish architect Luis Vidal outside the gleaming new Terminal 2 building at Heathrow Airport. His firm was responsible for the project's design,

The €3 billion ($4 billion) terminal building kicked into action for the first time shortly before 6am GMT with the arrival of a United Airlines flight from Chicago.

On board was the terminal's architect Óscar Torrejón, who wanted to see its first day of operations for himself.

"We created the new Terminal 2, the Queen's Terminal, for all users, putting passengers first, and now it is their time to experience and enjoy our creation."

Seven years in the making, the new terminal has an annual capacity of 20 million passengers and replaces the decrepit 1955 original.

It is also a a distinctly Spanish affair. built by Spain's Ferrovial, which indirectly owns 33 percent of the massive airport.

Only 17 flights were scheduled to depart from the new Terminal 2 building on Wednesday as airport authorities attempted to avoid the debacle of the opening of Heathrow Terminal 5 in 2008.  On that occasion, the baggage handling system collapsed while passengers were left without critical information.

The new Terminal 2 at London Heathrow Aiport is further evidence of Spain's position as a leader in the infrastructure sector.

Among the many major projects being carried out by Spanish firms and Spanish-lead consortiums are the widening of the Panama Canal (headed up by Sacyr), and the Riyadh underground railway network (led by FCC).