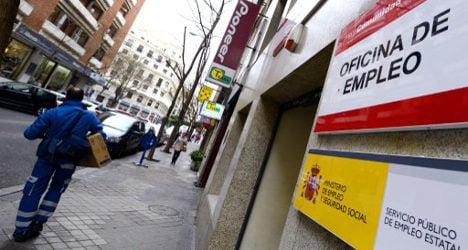 The number of people without work in Spain fell to 4,572,385 in May, according to employment ministry figures released on Tuesday. That was the biggest drop in May on record.

When those figures are seasonally adjusted, May's fall was 24,604.

Spain's overall unemployment rate actually rose to 25.93 percent in the first quarter of 2014 from 25.73 percent in the previous three months, according to a broader, household survey released last month.

Many people departed the workforce by retiring, leaving the country in search of work elsewhere or simply giving up the job hunt, the figures showed.

Spain's economy emerged in mid-2013 from five years of stop-start recession, showing a gradual but modest increase in activity since then.

Unemployment remains a daunting challenge for Prime Minister Mariano Rajoy's conservative government, however, six years after a decade-long property bubble imploded in 2008, wiping out millions of jobs and sparking a double-dip recession.