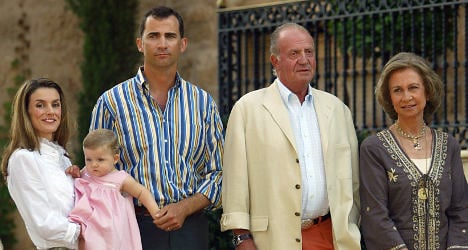 Why did King Juan Carlos abdicate choose Monday to abdicate?

According to Spanish media reports, the king first decided to abdicate in January after he found himself stammering  through a speech before military officers at the Royal Palace.

He is then supposed to have informed Spanish Prime Minister Mariano Rajoy and socialist opposition leader Alfredo Pérez Rubalcaba as early as March. So why did he wait until Monday to abdicate?

Juan Pedro Valentín, the head of news at Spain’s Cuatro television channel believes the king had postponed his abdication until he was in good health following a hip operation in November 2013.

The king had also waited until after the recent European elections to make the announcement, the journalist added.

Another argument being put forward is that the poor results of Spain’s major parties in those elections — the two parties combined picked up less than half of the vote — could jeopardize the future of the crown if they were to be replicated in Spain’s 2015 general elections.

As it stands 91 percent of Spain’s parliamentary representatives will back the law required to make Felipe VI Spain’s new king. But a further fall in the popularity of the two parties in next year's general elections could see smaller parties pushing for an end to the monarchy.

The short answer is that an exact date has not been fixed. While the legal process is fairly straightforward, it appears that Spain’s parliament will not proclaim Prince Felipe as Spain’s new king for another four to six weeks.

On Tuesday, the Speaker of Spain’s lower house Jesús Posada said the Parliament would approve Prince Felipe´s succession on June 18th. The final date of the 46-year-old’s enthronement will, however, be set by the Royal Palace.

What will the king’s legal status be in future?

This is one of the big questions facing the royals. While the Spanish Constitution of 1978 makes provision for royal abdications, it doesn’t spell out the legal status of a monarch who has resigned.

At present, the monarch cannot face charges in court but it is not clear whether this legal protection will continue after abdication.

On Tuesday, Spain’s 20 minutos newspaper speculated the law paving the way for Prince Felipe’s succession to the throne could include articles clarifying the future position of Juan Carlos.

But the draft law which will be used to usher in the reign of Felipe VI only contains one article: it states that King Juan Carlos is abdicating. Royal watchers will now have to wait on future developments.

Where will Spain’s new king and queen live?

This question, at least, appears to have been answered. King Juan Carlos and Queen Sofia will continue to live in their current residence, the Zarzuela Palace on the outskirts of Madrid.

The future King Felipe and Queen Letizia won’t have to pack any boxes either. According to Spanish news agency Efe, they will continue to live in the €4 million ($5.6 million) residence they moved into in 2002. Family visits won’t be a problem either. The young royal couple’s 1,800-square metre (19,000-square foot) home is on the grounds of Zarzuela Palace and only half a kilometre from away from the main palace.

How will the king’s abdication affect events in Catalonia?

The Spanish region of Catalonia is still pushing hard for a November 9th vote on the issue of independence, despite Spanish Prime Minister Mariano Rajoy and the Spanish parliament declaring the move illegal.

On Monday, shortly after King Juan Carlos announced his abdication, regional president Artus Mas said the road map for independence would go ahead despite the change of king.

But the arrival of the younger, more popular, Felipe VI could take some of the wind out of the sails of Catalonia’s independence movement, especially among swinging voters.

Could we see a referendum on the future of the monarchy?

On Monday night, thousands of people around Spain protested in favour of a referendum on the future of Spain’s monarchy. Parties including the left-wing Izquierda Unida and Podemos have also backed the move.

But could such a referendum go ahead? The short answer is yes, but it wouldn’t be a walk in the park: the king has a central role in Spain’s constitution of 1978, and changing this would require some serious political manoeuvring.

Firstly, two thirds of Spain’s upper and lower houses of parliament would have to back a move to change the constitution. If that were to happen, a double dissolution would be required.

The newly elected chambers would then have to separately vote on the proposed changes to constitution. The same two thirds majority would be needed in each chamber and only then could a referendum on the future of the monarchy go ahead.

With some 91 percent of Spain’s political representatives reportedly in favour of the law paving the way for the arrival of Prince Felipe, this is unlikely to happen.