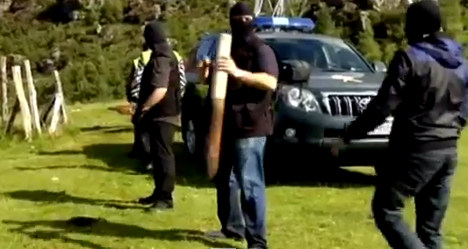 The four were detained in early morning raids on changes of promoting terrorism by creating the so-called Gudari Forest, or Forest of Soldiers, in the Basque town of Oiartzun.

The forest is made up of 239 oak posts, each with a numbered plaque representing a dead member of the Eta separatist group.

The men were attempting to create a public space to honour those dead and legitimize terrorism, said Spain's interior ministry in a statement on the arrests.

Eta, which announced an end to violence in 2011, is blamed for the deaths of 829 people in a four-decade campaign of shootings and bombings for an independent Basque homeland in northern Spain and southwestern France.

The group is considered a terrorist organization by Spain, the European Union and the United States.

Spain was recently named by the EU cross border police agency Europol as the third most dangerous country for terrorism activity in Europe after France and the UK.