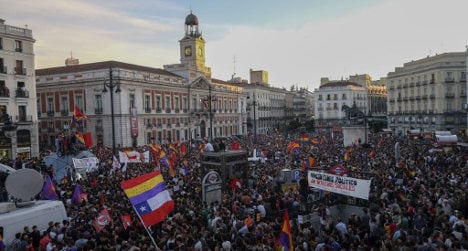 There were more than 60 demonstrations across Spain with around 10,000 packing themselves into Madrid's Puerta del Sol, according to police estimates.

They chanted republican slogans such as "real transition without a king", "throw the Bourbons to the sharks" and "Spain will be republican tomorrow".

"I think now would be a good time to proclaim a republic," said Paola Torija, a 24-year-old therapist for the disabled, following the king's abdication announcement.

"He had his moment of glory but today it is a bit archaic, a bit useless, an extra cost especially in the crisis we are living in," she said.

Left-wing Izquierda Unida (IU) party leaders – who had called for a referendum moments after King Juan Carlos’s announcement on Monday – were also present at the mass gathering.

Earlier in the day Lara had said "it was unthinkable that in the 21st century we are still talking about blood rights".

No violent incidents were recorded although a group called ‘Surround the Parliament’ were blocked by police when they tried to protest outside Madrid’s Royal Palace.

Barcelona’s Plaza de Catalunya square saw 5,000 demonstrators gather to call for a referendum on the monarchy.

There were also a pro-republican demonstration outside the Spanish Emabssy in London, attended by hundreds.

Spain's King Juan Carlos surprised the country and the world on Monday with his announcement that he was abdicating.