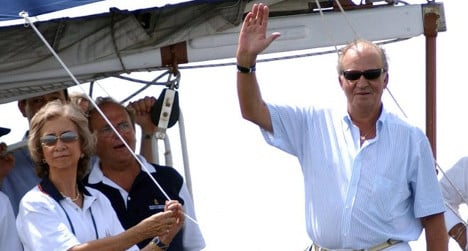 Quit while you're behind? King Juan Carlos is the only key Spanish figure to step down since the crisis began. Photo: Oscar Pipkin/AFP

When I was a young boy growing up in Spain in the 90s, King Juan Carlos was wildly popular.

His approachability and down-to-earth nature always came across when he amicably hugged everyone from world leaders to cup-winning football players.

It wasn’t until I watched the British royal family on TV while visiting my grandparents in the UK that I became familiar with the concept of protocol and the apparent distance between them and their people. Perhaps it was partly a cultural difference between tactile Spaniards and reserved Brits.

But King Juan Carlos was a modern-day king who seemed to be a source of pride for both Spaniards of my generation and those who had lived through the years of dictatorship under Francisco Franco.

He oversaw the creation of a new system of parliamentary monarchy, approved by referendum through a new constitution in 1978, and he is widely credited with helping defuse an attempted military coup in 1981.

His appearance on TV urging support for the democratic government while lawmakers were held hostage in Parliament is as rich in symbolism to Spaniards as Winston Churchill’s WWII speeches are to Brits or Martin Luther King's speeches are to Americans.

As Spain prospered under democracy, the easy-going monarch cemented his role as the country’s top representative abroad: the man who shook hands and shared a joke with Nelson Mandela, Bill Clinton, Pope John Paul II and many more.

SEE ALSO: IN PICTURES: The reign of King Juan Carlos

His son and daughters' weddings were avidly celebrated across Spain, with no mention of public spending or royal extravagance making national headlines or becoming a matter of popular resentment.

But the carefree attitude of Spaniards towards their costly royals took a battering when the economic crisis started to bite in 2008.

As the dole queues grew, excessive public spending and dubious dealings by the country’s leaders – royal and political – were put under the microscope.

Not long after, the King’s daughter Infanta (princess) Cristina was linked to her husband’s business affairs. She was eventually declared a suspect in January 2014.

Amid signs that public approval of the monarchy was slipping in the economic crisis, it was King Juan Carlos himself who played the biggest part in his drop in popularity.

In 2012, many Spaniards were furious to learn that he had taken a luxury elephant hunting trip to Botswana, considered an unacceptable extravagance during a recession.

It not only undermined earlier declarations that he lost sleep thinking about Spain’s unemployed youth, it also pigeonholed him as an out-of-touch monarch who showed no remorse for killing endangered species.

He did apologize though, profusely. "I’m very sorry. I made a mistake and it won’t happen again,” he told journalists with a look in his eyes which echoed the gravity of the situation.

His popularity, as a January 2014 poll by Spanish daily El Mundo confirmed, never recovered from the hunting incident.

The number of people with a high or very high opinion of the king had fallen 9 percent over 2013 to 41 percent.

Another recent survey by pollster Sigma Dos found 62 percent of Spaniards thought King Juan Carlos should abdicate in favour of his son Felipe.

Was he forced to go? Had it been preceded by weeks of rallies directed specifically at the monarchy? Did it come after a nationwide referendum asking all Spaniards what they wanted?

No, the decision was by all accounts solely his and the product of a long period of reflection.

Although his farewell speech didn’t contain an official apology for his own actions, King Juan Carlos said Spaniards need "to take self-critical stock of our errors” and “to correct mistakes” made during the crisis.

By doing so, the outgoing monarch may have also been alluding to his own errors during this time as king.

Most importantly, he did what no other major Spanish figure has yet done since the crisis began: He chose to resign.

As top conservative politician Esperanza Aguirre said in 2012: "In Spain, nobody steps down."

Perhaps King Juan Carlos's decision will lead other public figures embroiled in corruption scandals  — whether they are guilty or not — to follow suit for the greater good.

This could be the only way to help Spain's elites (politicians, party officials, business people and judges) to regain the confidence of the Spanish people and bring about the type of generational change King Juan Carlos called for on Monday.