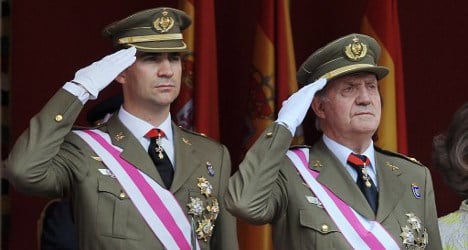 Spain sets its future King Felipe VI on the path to the throne Tuesday, launching an unprecedented, possibly weeks-long handover of the crown in an economically troubled, divided realm.

A day after King Juan Carlos announced he is ending a 39-year reign that guided Spain from dictatorship to democracy, the government begins the process of replacing the monarch for the first time in its post-Franco history.

Prime Minister Mariano Rajoy presides over an extraordinary cabinet meeting at midday (1000 GMT) to draw up a draft abdication law, which must then be approved by parliament.

The law, which could four weeks to be approved according to Spanish media.

Here is an outline of the process:

Prime Minister Mariano Rajoy has called an extraordinary meeting of his ministers for 12pm (10:00 GMT) Tuesday to draw up draft legislation on Juan Carlos's abdication, as required by Spain's 1978 constitution.

Spain's lower house of parliament, the Congress of Deputies, holds an urgent session to hear and vote on the draft legislation. A majority of the 350-seat parliament — half the members plus one — is required for the legislation to be approved.

The draft legislation will be based on provisions in Section 57 of Spain's 1978 constitution, and could be as short as a few lines long.

SEE ALSO: IN PICTURES: The reign of King Juan Carlos

King Juan Carlos's abdication is effective the day that the new law is published in the Official State Bulletin. A new monarch may then be proclaimed immediately.

Under the constitution, Crown Prince Felipe will inherit the throne because he is the king's oldest male child. The new King Felipe VI will be proclaimed king by parliament. He must swear to carry out his duties; obey the constitution and the laws and ensure they are obeyed; and respect the rights of Spain's citizens and regions. Rajoy said Monday he hopes parliament will swear in the new monarch "very soon".

An enthronment ceremony may be held soon after the proclamation of a new king. Guests are likely to include heads of state and government and members of other royal houses. For example, Juan Carlos was anointed in a mass at Madrid's Jeronimos Church on November 27th, 1975, five days after parliament had proclaimed him king.