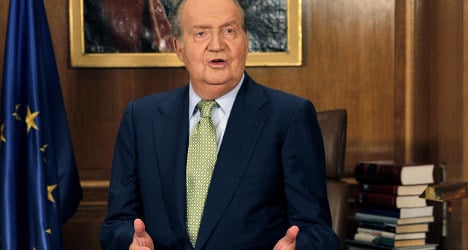 Spain's King Juan Carlos is to abdicate. Photo: AFP
KEY POINTS
– Spain's King Juan Carlos is to abdicate at the age of 76
– Juan Carlos's oldest son Prince Felipe is set to become the next King of Spain, with his wife Letizia to be Queen. Felipe will become Felipe VI of Spain
– The exact timeframe for the abdication is yet to be finalized but  Prime Minister Mariano Rajoy has called a special meeting of ministers to prepare the process.
– Catalan leaders say the push for November independence vote will go head despite the change of king.
– Many left-wing parties are now calling for a referendum on the future of the monarchy.
17:10 Thanks for reading The Local's live blog dedicated to the abdication of King Juan Carlos. We are not longer updating this story, but stay tuned to our site for all the latest news on one of the biggest stories in Spain in 2014.
16:50: Did the Spanish royals' social media manager know something we didn't? The royal family's Twitter account @casareal was launched just ten days ago. Perhaps this should have been a clue?
By the way, the tweet announcing the king's abdication has now been retweeted nearly 27,000 times and favourited over 5,000 times.
16:31: The Local has now posted a gallery of ten great photographs of the reign of King Juan Carlos. Here's a sample:

King Juan Carlos of Spain, right, with Cuban leader Fidel Castro in 1998. Photo: AFP
16:25 Spanish tennis star Rafael Nadal has described Spain's outgoing king as "wonderful". "He is a wonderful person who was a great representative of our country and Spain should thank him," said Nadal who is currently in Paris for the French Open.
"I wish him the best for the future. You cannot ask for more for a person who has done so much."
16:08: Speaking of Catalonia, here is a tweet from today showing Spain's Republican flag (with the horizontal red, yellow, and purple stripes) flying along a Catalan independence flag outside the town hall of the Catalan town of Altafulla:

15:54: Will the change of king in Spain affect Catalonia's push for independence? The President of Catalonia Artus Mas says no.
"There will be a change of king in Spain but there won't be a change in the Catalan political process that will be bring us towards a free vote (on the issue of independence) on November 9th," said Mas at a press conference shortly after the king's televised speech.
15:46: The full text of King Juan Carlos's abdication speech is now available here.
15:30: Felipe's main challenges will be living up to expectations that he can revive the monarchy, and restoring hope to a country which has been battered by the long economic crisis, writes journalist Antonio Caño in Spain's El País newspaper.
15:15: Prince Felipe's full name is Felipe Juan Pablo Alfonso de Todos los Santos de Borbón y de Grecia. He is 46 years old and 1.98 (6 foot 6 inches) tall. He's also a former Olympic yachtsman. He participated in the 1992 Barcelona Olympics and was even Spain's flag bearer at the event.
14:52: Spain's Crown Prince Felipe could be King Felipe VI within a matter of days, or even hours. Now that King Juan Carlos has announced his intention to abdicate, the next step is for Spanish Prime Minister Mariano Rajoy to formally transmit this message to the Spanish Parliament —  a move planned for Tuesday.
A bill will be drawn up paving the way for the royal succession and this law then has to be passed by both the lower and upper houses of the Spanish parliament. The final step is for both houses to proclaim Felipe as Spain's new king.
14:42: Veteran royal household staffer José Ortega says he was shocked by King Juan Carlos's abdication. Apparently Spain's king is fond of sayings like "I will die wearing my crown" or "Kings don’t abdicate, they die in their sleep."
14:34 When Prince Felipe is crowned, he will also become King of Jerusalem, as is King Juan Carlos now. His title, according to the 1978 constitution, will be simply King of Spain, but the Kings of Spain have never formally renounced the Jerusalem title.
14:16: The President of Andlusia Susana Díaz calls King Juan Carlos's abdication an "important change" which will open the way for a new generation.
13:55: French President François Hollande has issued a statement on the abdication of King Juan Carlos: "For a reign of almost 39 years, Juan Carlos incarnated a democratic Spain, whose birth he played an important part in. Architect of the transition after the Franco dictatorship, he guided the country on a path of civil liberties and integration into Europe and modernity."
13:39: "It is unthinkable that in the 21st century we are still talking about the blood rights," says Cayo Lara, the leader of Spain's left-wing Izquierda Unida, calling for a referendum so that people can choose between "monarchy and democracy".
13:35: German chancellor Angela Merkel has highlighted the political role the Spanish King Juan Carlos played after his decision to abdicate was announced on Monday. She held him in high esteem,  "personally as well as his historical role in Spain's transition to democracy," said the government spokesman Steffen Siebert on Monday in Berlin. Merkel has very good memories of her meetings with Juan Carlos and wishes him the very best.
13:19. The King speaks for five minutes and thanks the Spanish people but says: "Now is the time for a younger generation to come to the fore".
"My son Felipe is the embodiement of stability. He has the maturity and the preparation and the sense of responsibility necessary to take on the role of Head of State.
"I feel pride and gratitude towards you," says the King to the Spanish people. "Thank you for all your support. I've wanted to be the king of all Spaniards, and I've suffered when pain and suffering has affected you."
"The crisis has served us to learn how to overcome problems, correct mistakes and make way for a better life," King Juan Carlos says.

Spain's King Juan Carlos (L) hands over a letter of abdication to Spain's Prime Minister Mariano Rajoy at the Zarzuela Palace in Madrid on Monday.Photo: HO/CASA REAL/SPANISH ROYAL HOUSE/AFP
13:07: The King is set to speak on television any moment.
13:01: The UK's Guardian newspaper is running the story of the king's abdication by asking "Should (Britain's) Queen Elizabeth follow suit?", and running a poll to ask readers for their opinion.
SEE ALSO: Spain's 'Prince Charming' could revive monarchy
12:57: King Juan Carlos is set to appear on Spanish television at 1pm to explain the reasons for his abdication.
12:55 Catalonia's pro-independence ERC are calling for people to protest outside town hall's nationwide at 8pm in favour of a Catalan republic:

12:42 The markets have reacted with indifference to news of the king's abdication, according to national daily El Diario:

12:30 Spain's ABC newspaper have reported that King Juan Carlos made the decision to abdicate in January, and that PM Mariano Rajoy and the head of Spain's socialist PSOE party Alfredo Pérez Rubalcaba have known since March.
12:37 The Speaker of the House for the Spanish Parliament, Jesús Posada, says Prince Felipe will be as good a king as his father. Posada received a personal call from the king. "It touched me," he said of the gesture.
12:26 Spain's national daily El País is set to publish a special afternoon edition in the wake of the announcement of the king's abdication. The last time that happened was after the terrorist attacks in New York on September 9th 2011.
12: 21 Spanish European elections surprise package Podemos have also called for a referendum on the future of Spain's royal family.

12:16: Most media outlets are now reporting 1pm for King Juan Carlos' television appearance in which he is expected to talk about his decision to step down.
12:13 There is confusion over what time the king will appear to speak about his decision to abdicate. Some reports are suggesting 12.30pm while others are saying 1pm.
12.09: Blick, Switzerland's top-selling tabloid newspaper, referred online to the resignation of Spain's "scandal king". His reputation as a saviour of Spanish democracy was "battered", the daily said, by reports of extra-marital affairs, rumours of illegitimate children, and an expensive hunting trip to Afria — when he was ambassador to wildlife group WWF. "The king caused outrage when in the midst of Spain's worst economic crisis in 2012 he travelled to Botswana for an expensive elephant safari," the newspaper said. It noted a survey in January showing that 62 percent of Spaniards felt he should resign, and also highlighted the fact the king was in poor health.
12:07 Commenters on the Facebook page of Spain's left-wing Izquierda Unida party are calling for demonstrations in support of a referendum on whether Spain should become a republic at 8pm in cities Spain wide.
12:03: Swedish royal expert Roger Lundgren tells the TT news agency: "Juan Carlos is Europe’s greatest monarch since he is the only one to have introduced democracy to the people. When he inherited the throne in 1975 Spain was a military dictatorship. He has abolished his political power and influence and is a constitutional monarch."
11:49 "The king's decision to abidcate is one of the most important political events in our country since we reinstated democracy (in 1975)", the leader of Spain's opposition socialist PSOE party Alfredo Pérez Rubalcaba says.

Footage of the dramatic failed 1981 coup in which Guardia Civil officers burst in on the Spanish parliament. King Juan Carlos is widely considered to have defused the situation with a speech calling for the officers to stand down.

11:45 Spain's centre-left and anti-Catalan independence Ciudadanos (Citizens) party describes the king's abdication as an opportunity for a "second citizen's transition" with a democracy more focused on the people.

11:44 Spain's centrist UPyD party say they will hold a press conference at 1pm to give their reaction to news of the king's abdication.

11:23 The story so far: "His Majesty King Juan Carlos has just told me of his wish to renounce the throne and begin the succession process of succession," PM Rajoy said during the press conference.

11:17 Spain's left-wing Izquierda Unida party calls for a referendum allowing for Spaniards to choose between monarchy and republic.