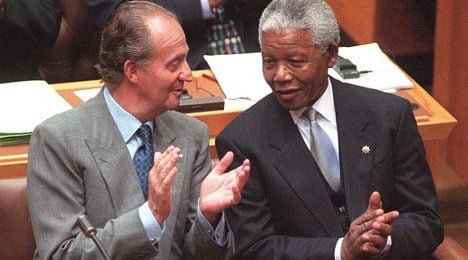 King Juan Carlos met former South African President Nelson Mandela in Cape Town in 1999. Photo: Sasa Kralj/AFP
Born in Rome in 1938, Juan Carlos was groomed to be a king by none other than Francisco Franco, the Spanish dictator who had forced his royal family into exile.
His role in Spain’s transition, following his coronation in 1975, was key to ensure that democracy prevailed in the post-dictatorship era.
HERE ARE 10 PHOTOS OF SPAIN’S KING JUAN CARLOS THAT WILL GO DOWN IN HISTORY