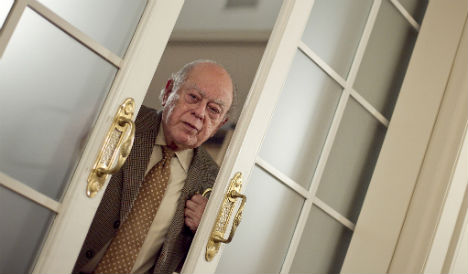 Former President of Catalonia Jordi Pujol poses during an interview with AFP in Barcelona on May 26, 2014. AFP Photo/Quique Garcia

For decades Jordi Pujol was the foremost champion of Catalan nationalism, who boosted the powers of the region even as he argued it should remain a part of Spain.

Now the former head of the regional government of Catalonia campaigns vigorously for outright independence, mirroring a shift in mood in the northeastern region of Spain.

"I've always been anti-independence, for 60 or more years of my life. And now at the end of it all I see that the conditions in which they want us to live in the Spanish state do not allow us to maintain our identity," he said in an interview with AFP.

"For me it is a very difficult decision to make because it is a recognition that what I thought could be, is not, and we have to change course," added Pujol, who was president of Catalonia from 1980 to 2003, at his office on Barcelona's majestic Paseo de Gracia avenue.

After a decade away from the first line of politics, the 83-year-old maintains the aura of power he gave off during his years in office, his stern demeanour commanding respect.

Pujol said the results of the EU elections in Catalonia, in which the separatist Republic Left party beat the nationalist Convergence and Union coalition which he helped to found in 1974 after abandoning medicine for politics, pointed to a changed political landscape.

The three Catalan parties that back a referendum on Catalan independence on November 9 — the Republican Left, Convergence and Union and the small leftist
ICV party — captured 55.8 percent of the vote in Catalonia in the European Parliament election on May 25.

"We don't know how these 56 percent will vote when there is a referendum, but it is clear that everyone rejects the existing situation and an important part of them are separatists, which they were not before," said Pujol.

As head of the Catalan government Pujol backed the central government in power in Madrid, whether it was of the left or right. In exchange, he won greater powers for Catalonia in education, language policy and policing.

He was seen as such a loyal Spaniard that the patriotic and conservative newspaper ABC named him "Spaniard of the Year" in 1984.

"The policy of seeking pacts was useful for Catalonia and Spain. But then Spain did not want to continue on this path," said Pujol, referring to a 2010 decision by Spain's constitutional court to water down a 2006 statute giving the region more powers.

Many Catalans, including Pujol, feel that was the tipping point which pushed the current head of the Catalan government, Artur Mas of Convergence and Union, to call the November 9 independence referendum.

Mas, who has headed the Catalan regional government since 2010, began pushing for a referendum after he failed to clinch a better financial pact from the central government for Catalonia.

Pujol said Catalonia now faced a choice between "a loss of influence or independence."

"From Spain there is no other proposal for us than to continue with a policy towards Catalonia that stifles us more economically, further reduces our powers and model of government and attacks key values for us in language, education and culture," he added.

Spanish Prime Minister Mariano Rajoy has called it "illegal" and has vowed to block the vote while the European Union has warned that Catalonia would be
excluded from the bloc if it broke away from Spain.

"I have been the president of the Committee of the Regions of the European Union, I have been an uncompromising defender of Europe when Spain was not
pro-Europe," said Pujol.

"But while Europe is very important, what is most important is that Catalonia can express its desire. Once it has expressed its will, we have to negotiate and see how to do things."