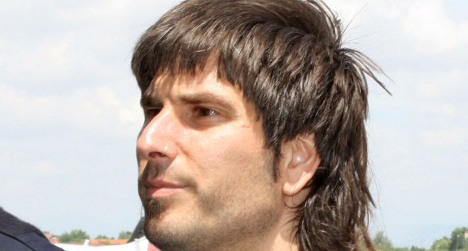 Harriet Aguirre Garcia is believed to have been the number two in Eta's military wing when he was arrested in 2005. Photo: Spanish Police/AFP

Garcia, 35, was arrested in France in 2005 on an international warrant and jailed in Spain, where he was wanted for the March 2001 murder of a deputy mayor, the ministry said.

He was believed at that time to be the number two in Eta's military wing.

On Saturday, Spanish press reported Garcia had been transferred to a Spanish prison in June 2013, and then released on May 27th. However, he was arrested on Friday because an Interpol arrest warrant remained active, media outlets said.

Eta, which announced an end to violence in 2011, is blamed for the deaths of 829 people in a four-decade campaign of shootings and bombings for an independent Basque homeland in northern Spain and southwestern France.

It is classed as a terrorist group by both the United States and European Union.

Earlier this year, the group said it would put its arsenal of weapons "out of operational use", in a historic first step towards disarmament.