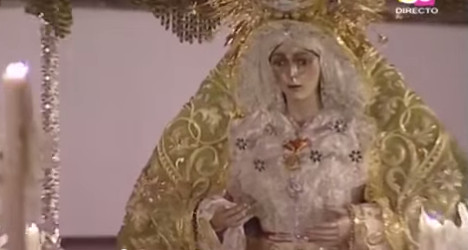 The Esperanza Macarena is perhaps Seville's most famous image of the Virgin Mary, the mother of God. Screen grab: YouTube

While people across much of Spain have been focusing lately on the European elections and the Champions League final between two teams from Madrid, the city of Seville has been busy with other matters.

This year marks the 50th anniversary of the Catholic Church's coronation of one of the most famous statues of the Virgin Mary in the city — the Esperanza Macarena.

To mark the occasion — which saw the Church offically recognizing the cult around the hugely popular Virgin — the statue has been paraded around the streets of the city for thousands of adoring followers.

The Esperanza Macarena being paraded around Seville.

But a recorded message from the city's town hall has also angered some people in the city famed for its dramatic Easter celebrations.

"If you want information about the events celebrating the 50th anniversary of the coronation of the Esperanza Macarena, press 0," the message begins. There is then a long pause before other options are given.

Users of the hotline have called it a "scandal" complaining about the use of public resources to religious events, according to online daily andaluces.es. The message is a violation of the principle of the separation of the State and the Church, those users argue

But the city has defended itself.

"It's not religious information, it's information providing a service. (The celebration) is the most important event the city is celebrating at this time and involves a lot of people moving around, and organization of traffic," a spokesperson for the city authorities said.

The city had opted for the message "because of the large number of calls," the spokesperson said, adding that the same thing was done for events like the city marathon, or during strikes affecting rubbish services.

This is not the first incident in recent times highlighting the tensions over the place of religion in Spanish society.

In February, police unions slammed a decision to award the force's Gold Medal of Police Merit to an image of the Virgin Mary. The medal is usually given to awarded posthumously to Civil Guard and police officers who have died in terrorist attacks.