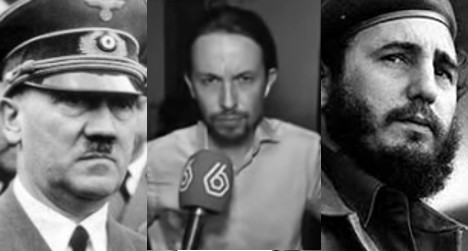 The leader of Spain's Podemos party Pablo Iglesias (centre) has been compared to everybody from Adolf Hitler to Fidel Castro. Screen grab: YouTube

Iglesias stands out for his age — he is just 35 — his appearance and his rhetoric, and, like the English with marmite, it seems Spaniards either love him or loathe him.

His European elections success came on the back of an anti-austerity message, and has been attributed to a widespread lack of faith in Spain's major parties among the country's voters after years of economic crisis and seemingly endless corruption scandals.

Among the country’s political elite, the sentiment is generally one more of distrust for a witty yet radical newcomer who mobilized no less than 1.2 million voters in just three months (the time his Podemos party – the name means 'We Can' – has been around for).

Spain’s ruling Popular Party has been the most outspoken about Pablo Iglesias, his call for change in traditional political and societal values clashing directly with their raison d’etre.

"Hitler won the elections in Germany by taking advantage of the general discontent and turning it into hope in his favour," tweeted Oña.

Then there’s Carlos Floriano, PP campaign leader during the European Elections, who admitted his party was "worried (about) the rise of the far-left".

"These are the guys who stormed the Parliament (and) surrounded my home," Floriano told a press conference in reference to the so-called escraches, a protest method seen in 2013 where demonstrators harassed politicians outside their homes and offices.

Right-wing newspaper La Gaceta even ran a piece under the headline "Pablo Iglesias buys his clothes at Alcampo", the low-cost French supermarket chain.

The story became a trending topic on Twitter, with users mocking how the daily was trying its best to undermine the ponytailed politician.

"Rumour has it if you stand in front of a mirror and say "Podemos" (We can) three times at midnight, Pablo Iglesias will dress you in Alcampo clothing."

Former socialist Prime Minister Felipe González has been the most outspoken opposition PSOE figure to lash out against Podemos, his former party having been dealt such a blow by their new left-wing competitors that all their attention is focused on finding a new leader.

"It would be a catastrophe if Bolivarian alternatives influenced by regressive utopian view were to govern Spain," said González on Thursday.

With his comments, González joins the lists of political commentators and right-wing leaders fearing that Iglesias, member of a political research group funded by the Venezuelan government, would transform Spain into a European version of the South American country.

‘Demagogue’, ‘extremist’, ‘heir to Fidel Castro’ are other terms cropping up online and in the country’s media.

Who Pablo Iglesias is and what his party would really do for Spain if Podemos were to reach a position of power is only a matter speculation for the time being.

But if you want to find out more about the ponytailed political scientist and why his name is on everybody’s lips, read The Local’s profile of Pablo Iglesias here.