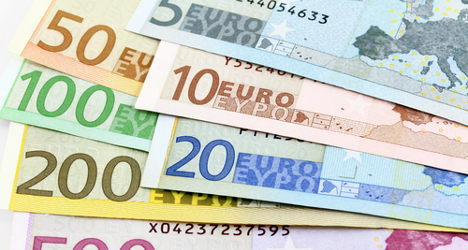 Photo of Euro notes: Shutterstock
Spain reported Thursday the fastest economic growth since a devastating 2008 property crash, even as 5.9 million people searched in vain for work with the unemployment rate stuck at 26 percent.
Boosted by domestic demand, Spanish gross domestic product grew at a quarterly pace of 0.4 percent in the first three months of 2014, the highest rate in six years, the National Statistics Institute said.
Spanish economic activity, though still modest, has gradually accelerated since the nation emerged in mid-2013 from five years of stop-start recession sparked by the collapse in 2008 of a 10-year property bubble.
Though unemployment remains sky high, at 25.73 percent in the first quarter of this year, the International Monetary Fund said this week it believes the recovery is here to stay.
"Spain has turned the corner," the IMF said in an annual report on the Spanish economy, which is the fourth-largest in the eurozone.
"We expect the recovery to continue over the medium term," the Washington-based fund said, adding that labour market trends were improving, too.
The IMF said Spain was reaping the benefits of austere budget policies and reforms introduced by the government, which has cut spending, raised taxes and curbed pension costs so as to rein in a bulging public deficit.
In 2012, Prime Minister Mariano Rajoy's government also introduced new labour legislation making it easier for firms to change their employees' work conditions, and cheaper to hire and fire staff.
Unpopular measures
The highly unpopular measures were aimed at creating work in a nation still suffering the aftermath of the 2008 property market implosion, which swamped the nation in bad debts and wiped out millions of construction-related jobs.
Official data show many people still dropping out of the Spanish workforce; either giving up job-hunting or leaving the country to search abroad.
But Rajoy's government points to encouraging signs in the labour market, too, with the number of people registered for unemployment benefits falling sharply in April.
A breakdown of the latest report, which confirmed preliminary data released on April 30th, showed the Spanish economy grew on an annual basis for the first time since mid-2011, expanding at a yearly pace of 0.5 percent.
Spain's official statistician said domestic demand had improved in the first quarter, helping to compensate for a smaller contribution to the economy from Spanish exports.
Spain's government last month raised its official economic growth target to 1.2 percent this year from 0.7 percent previously. For 2015, the target was raised to 1.8 percent from 1.2 percent.
But the outlook for the labour market was relatively stark, with a jobless rate of 24.9 percent in 2014 and 23.3 percent in 2015, only dipping below 20 percent in 2017.
Despite struggling to meet past targets to cut its public deficit, the government said it now expected to trim the shortfall to the equivalent of 5.5 percent of economic output in 2014 compared to a previous target of 5.8 percent.