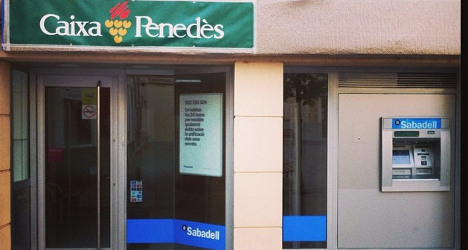 Spain's High Court ruled the executives with Caixa Penedès had improperly managed funds by allocating themselves pensions worth a total of €28.6 million ($38.4 million).

The bank's general director Ricard Pagès Font was sentenced to two years in prison while former executives Manuel Troyano, Santiago José Abella and Juan Caellas were all sentened to one year.

The accused had acted in a "malicious, insidious and deceiptful" manner" putting "personal interests" before the interests of society, said the judge in his ruling.

They had abused "the trust the depositors had put in" them, he added.

But the men will escape jail after agreeing to forgo the pensions in question and repay any money already received.

The presiding judge said this decision, along with the attitude of the bank executives, and the fact that none of them had previous criminal records were mitigating circumstances in the case.

Caixa Penedès, part of Spain's  Banco Mare Nostrum, received rescue funds worth €915 million and was swallowed up by Banco Sabadell in October 2013.