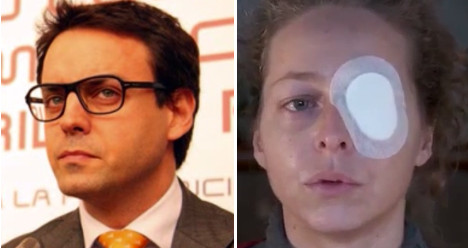 Prat denies his resignation is linked to the controversy surrounding Esther Quintana, a woman who claims she lost an eye after being shot by a police rubber bullet. Photo: YouTube

Manel Prat, who has headed Catalonia's regional police force, the Mossos d'Esquadra, since 2011 has faced growing calls to step down since a judge ruled last month that the woman was hurt by a rubber bullet shot by police.

Catalan police insist they did not use rubber bullets during clashes with protesters during a general strike in Barcelona, the capital of the northeastern Spanish region, in November 2012.

They argue the woman, Ester Quintana, was injured by violent rioters.

Two officers from the Mossos d'Esquadra face a trial over the incident, which led the Catalan government to ban the use of rubber bullets. Police now use rifles that fire foam pellets.

Prat told a hastily convened news conference in Barcelona that he had tendered his "irrevocable resignation" to the head of the regional Catalan government on Tuesday morning.

"I take this decision for strictly personal reasons as I feel that from a professional point of view I have closed a very important stage in my life," he said.

He insisted that his decision to step down had nothing to do with Quintana's injury, adding he was confident that the two police officer under investigation over the injury would be absolved of any wrongdoing.

"I have said, and I want to make it clear again today, that if undeniable evidence emerged, referring to images, that demonstrated her injury was caused by a rubber bullet I would resign immediately. This is not the situation and I am not going for this reason," he said.

The Mossos d'Esquadra has also been heavily criticised after eight of its members were indicted last year on suspicion of beating up a man while arresting him in Barcelona, causing his death.

Spanish media have broadcast video footage taken by area residents from their balconies showing policemen repeatedly kicking and punching the man as they pinned him down on the sidewalk.

Catalan police have said they were forced to pin the man down because he was agitated and had turned on them.

Police clashed with protesters who burned bins and vehicles in Barcelona on Monday as anger boiled over at the eviction of activists from a well-known squat.