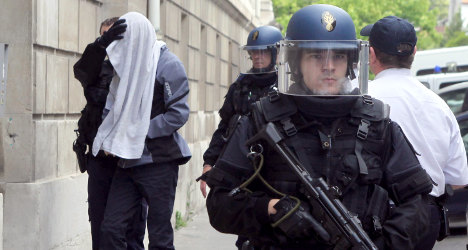 There were 33 terrorist attacks and 90 arrests for terror-related activities in Spain in 2013.

Only France with 63 attacks and 225 arrests, and the UK — which saw 35 attacks and 77 arrests — were more dangerous for terrorism.

These are the findings of a new Interpol report into terrorism activities in the European Union in 2013, a year which saw seven deaths in the EU from terror attacks.

The report by the cross-European police agency reveals six of the 33 attacks in Spain were carried out by left-wing groups, and 26 were separatist attacks. Spain's attacks included the placement of a homemade bomb in Madrid's Almudena Cathedral in Madrid, which did not explode. In October, a similar device was left in the Basílica de Nuestra Señora del Pilar in Zaragoza, but this device didn't detonate either.

Another incident saw a parcel bomb was sent to the director of a Catholic school in Madrid.

Among the people arrested on terror charges in 2013 in Spain were members of the Basque separatist group Eta, blamed for more than 800 deaths in a four-decade campaign of bombings and shootings for an independent homeland in northern Spain and southwestern France.

In addition, nine men were also arrested in Spain's North African enclave of Ceuta (Spain), suspected of belonging to a terror which sent volunteers to Syria, to fight  alongside groups including Jabhat al-Nusra (‘support front’)  and the Islamic State in Iraq and the Levant (ISIL).

The network appears to have had international links to Morocco, Belgium, Turkey and Syria, and to have successfully sent at  least 12 young Spanish and Moroccan men to Syria, a number  of whom died there in suicide attacks or combat.

"There is a growing threat from EU citizens who, having travelled to conflict zones to engage in terrorist activities, return to the European Union with a willingness to commit acts of terrorism," says Rob Wainwright, Director of Europol.

"This was especially evident in the case of Syria in 2013.

"This phenomenon adds a new dimension to the existing threat situation in the European Union, since it provides new groups within Member States with both terrorist intentions and capabilities, which may result in terrorist attacks with unexpected targets and timings,” Wainwright added.

Europol’s report, released on Wednesday, revealed the “continuing terrorist threat posed to the security of citizens and interests of the European Union”.

"Be it right or left-wing extremism, separatism or religiously motivated acts, we need to step up our work to respond to the threat of radicalisation.

“Radicalization leading to violent terrorism is a gradual process and does not happen overnight. In times when populist movements and xenophobic winds are sweeping across Europe, it is more important than ever to keep this in mind." says Commissioner Cecilia Malmström.

The average sentence handed out was 14 years.