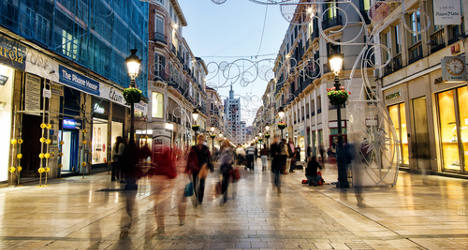 "Spain has turned the corner," the International Monetary Fund said in a report on the eurozone's fourth-largest economy, which emerged in mid-2013 from five years of stop-start recession.

The Fund noted that Spain grew in the first three months of this year at a quarterly rate of 0.4 percent — the fastest clip since a 2008 property crash destroyed millions of jobs and flooded the nation in debt.

"We expect the recovery to continue over the medium term."

The Fund said the "collective efforts" of Spanish society were bearing fruit.

In 2012, his conservative Popular Party government introduced new labour legislation making it easier for firms to change their employees' work conditions, and cheaper to hire and fire staff.

Spain posted an unemployment rate of 25.73 percent in the first quarter of 2014, down from a record 26.94 percent a year earlier.

Many people have left the workforce, however, either giving up looking for a job or leaving the country in search of work, official data show.

"The Spanish people are still suffering from the legacy of the economic crisis," the IMF acknowledged.

"Most importantly, 5.9 million people are unemployed, more than half of them for more than a year," it said, adding that this had crimped incomes and left people and companies in heavy debt.

The Fund pressed Spain to help companies restructure their debts.

It also urged the government to cut the bureaucratic red tape faced by firms. In particular, it called on Madrid to introduce a law removing barriers to competition in professional services "without further delay".

"Together with continued wage moderation, this would help ensure the recovery translates into more jobs, greater job security for the employed and lower costs of living," it said.

The IMF called on Spain to overhaul its 21-percent VAT rate system, so as to gradually withdraw the special, reduced rates that apply to a range of items from food to books, hotels and restaurants.

Spain has room to lower its 30-percent corporate tax rate, the IMF said, warning however that the rate should not be lowered to 20 percent, which would be below the EU average.

"There is less room for significantly cutting top personal income tax rates," the Fund said, however, citing a need to sustain revenues.