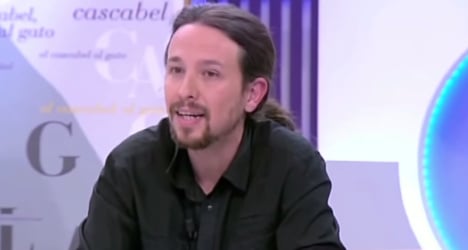 Pablo Iglesias, leader of the Podemos party, made a name for himself as a regular guest on Spanish political talk shows. Screen grab: YouTube/Canal 13

How have I never heard of Pablo Iglesias before?

Rest assured, you’re not alone. Had Iglesias’ party Podemos (We Can) not won five seats in Brussels he may have remained a household name only in Spain. But their 1.2 million votes on Sunday have made the news across Europe and further afield, with Iglesias at the centre of all the intrigue.

How did they manage to do so well?

Perhaps the most crucial factor is the massive drop in support for Spain’s ruling conservative Popular Party (PP) and their socialist opponents PSOE. Both have been embroiled in corruption scandals and, when handed the reins of power by the country’s disillusioned population, they’ve seemed equally unable to solve the grave issue of unemployment and poor economic performance.

The other significant cause is Pablo Iglesias himself and how he has come to represent the educated but disgruntled youth who took part in Spain’s Real Democracy Now protest, popularly known as the 15-M, which gained worldwide coverage when thousands of young people camped out in Madrid’s iconic Puerta del Sol for months in 2011.

Young, eloquent and well-informed, his rhetoric has struck a chord with many Spaniards of the same demographic who have seen him intellectually humiliate politicians and high-placed commentators in the country’s much-loved TV debate shows.

How did he get to where he is now?

Iglesias, born in Madrid in 1978, is a political scientist and university lecturer with an enviable academic CV under his belt. Active in left-wing protests since the age of 14 — he was a member of the Communist Party’s youth wing — his analysis and calm and collected approach in both online media and TV debates have earned him respect on both sides of the political sphere.

What really made hundreds of thousands of Spaniards start tuning in to watch Iglesias was when he dared to enter the ‘lion’s den’ in talk shows featured in openly right-wing channels like Intereconomía.

These heated debates, where decibels usually count more than decimals, gave Iglesias the chance to show off his intellect and leave outspoken supporters of Spain’s ruling Popular Party nervously skimming through their notes in the hope of finding a way of silencing his denunciation of the country’s elitist system.

So he’s gone from TV star to political prodigy in just three months?

Pretty much. In March, Iglesias joined forces with many other left-wing intellectuals and they decided they would stand as candidates for the upcoming European Elections if they were able to attract 50,000 followers online.

They then obtained the 15,000 signatures they needed to launch their campaign, which was paid for completely through crowdfunding (online donations).

Their main campaign goals include a 35-hour working week, retirement at 60, the scrapping of recent labour and austerity reforms, abolishment of temporary work agencies, an end to the country’s two-party dominance as well as putting a stop to the influence Germany and the troika of the International Monetary Fund, the European Commission and the European Central Bank have over Spain.

Their main political rivals have written them off. The number one candidate of the Popular Party, for example, Miguel Arias Cañete says they are "too small" to make a difference.

But on Sunday  Podemos came out as the fourth most voted party in Spain with 1.2 million votes and five seats in Brussels.

“From tomorrow, we will work together with other partners from southern Europe to say that we don’t want to be a colony of Germany and the troika,” Iglesias told supporters after receiving the positive news.

What has been the reaction to Iglesias’ and Podemos’ surprising success?

Spain’s socialists have been dealt a damaging blow by the newcomers’ accomplishment, with PSOE leader Alfredo Pérez Rubalcaba saying he will stand down and many political analysts arguing that Podemos have broken up Spain’s two-party system for good.

The Popular Party, who laughed off Iglesias’ candidature before May 25th, are now comparing him to everyone from Fidel Castro to Adolf Hitler on the basis that he is a populist feeding off the discontent of many young radical Spaniards.

But the overriding opinion among much of the Spanish population is that while Iglesias and Podemos have breathed new life into a stale and disenfranchised political system, their goals are unfeasible and they lack the governmental structure to make a real difference.

People vote to “make themselves happy” in the European elections said Rosa Díez, the head of Spain’s centrist Union for Progress and Democracy party on Tuesday.

It would be different in the case of Spanish elections, she suggested.