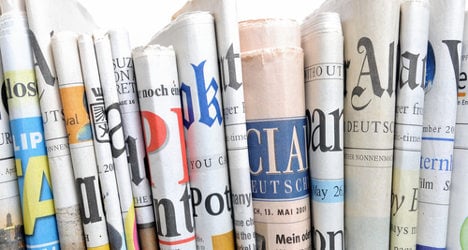 For Spain's centre-left El País newspaper, as for many other Spanish dailies, the main take home from the EU elections was the end of the country's 'bipartidismo', or the dominance of the major two parties, the ruling Popular Party (PP) and the main opposition party, the socialist PSOE.

The two parties lost 17 seats between them to claim only 30 of the 54 seats on offer in Brussels, with the crisis stealing votes from the ruling Popular Party and the 'indignados' or '15M' anti-austerity movement dealing a near-death blow to the socialists, El País said.

The paper pointed out that the PP was one of only two national governments to 'win' the European elections  — the other being Angela Merkel's CDU but said the night's biggest winner was Podemos, a left-wing party that grew out of the indignados movement.

The new party, led by political scientist Pablo Iglesias, claimed five seats and collected over 1.2 million votes, a sign of voter disenchantment with the PP and the PSOE.

A punishment without comparison

For centre-right newspaper El Mundo, the results were a "punishment" without comparison for the two major parties in Spain.

"The Spaniards have taken the opportunity to deal a harsh blow to the two major political forces and they have done it by handing their vote to the much smaller parties, including newborn ones. These last have been the big surprise," said El Mundo, referring to the rise of Podemos and, to a lesser extent, the green-nationalist coalition of European Spring.

The paper also pointed out the nearly 10 percent of the vote garnered by the left-wing group Izquierda Plural. The group could well have picked up an extra votes and more seats than the six it managed if not for the other smaller parties like Podemos, according to El Mundo.

The PP wins, but suffers

Conservative national daily ABC handed victory to Spain's PP government, while admitting the party was "suffering" after Spain's smaller parties took "a bite" out of their power.

The paper also took time to highlight the words of the top PP candidate Miguel Arias Cañete. Spain had to be "very careful" before speaking of a "death sentence for bipartisanship" the former agriculture minister was quoted as saying.

Cañete also said it was much easier for small parties to make an impact in the European elections because citizens don't see a threat to "the governability of the town of State".

He said plenty of PP voters hadn't participated in the European elections because they either hadn't understood or hadn't liked the "harsh measures" undertaken by the Spanish Government to get the country out of the crisis. Cañete said, however, that those voters would return to the party for the general elections in 2015.

For Spain's El Diario newspaper, Sunday's election results were a "devastating defeat" for the PP and the PSOE. Their results had shattered" the traditional division of power in Spain, the daily said.

The socialists were the biggest losers of the night, being "sunk" by the results with any option — including a change in leadership — now on the table.

"We'll see that decision come out of these very bad results," the party's top candidate for Brussels, Elena Valenciano, was quoted as saying.

The Popular Party, for its part. was keeping its victory celebrations low-key with headquarters in Madrid "like a cemetery", the daily said.

The worst result ever

Left-wing newspaper El Público also chose to dwell on the worst results ever for Spain's PSOE. The party "still haven't touched bottom", the daily said after the socialist picked up just 23 percent of the vote.

El Público said the results could force leader Alfredo Pérez Rubalcaba out the party. "Everything points towards Rubalcaba announcing his exit or at least establishing a route map for his succession as soon as possible," the daily said.

The only high point for the party was its victory in Asturias, Extremadura and Andalusia: In Andalusia, the PSOE came out ten percentage points ahead of the Popular Party.

But Catalan daily La Vanguardia also pointed out that the Catalan branch of Spain's PSOE party, the PSC, came in in a disappointing third place, winning just 14.28 percent of votes — its worst ever result ever in Europe.

Party leader Pere Navarro said the PSC — which is officially anti-independence but rife with internal divisions on the issue — was "taking note" of the result and there would now be a period of "reflection".

"The PSC didn't achieve good results. Despite everything the panorama is very similar to the (Catalan) parliamentary elections," said Navarro, referring to the 2012 regional elections with the party picked up 14.43 percent of the vote.