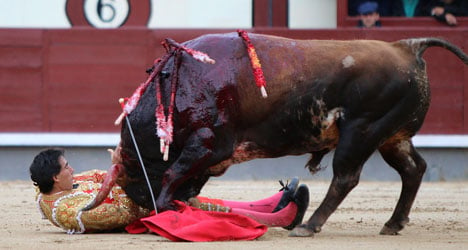 Five groups made a joint statement declaring their "complete repulsion" towards what they described as "unspeakable" comments made on the social media network after Madrid's San Isidro bullfighting festival was cancelled.

They claimed that the comments incited hatred towards both the injured bullfighters "who shed their blood in the arena of Las Ventas" and bullfighting in general, which they described as "fully recognized" as a legal activity of "ethical and cultural value".

In the statement the groups also hailed the "dignity and sacrifice" of the injured bullfighters and said that the offensive comments on Twitter were made by users "protected by cowardly anonymity or by a misunderstood use of freedom of expression."

They also stated their intention to strive towards making Spanish authorities put an end to the "despicable" anti-bullfighting expressions.

The organization Juventud Taurina (Bullfighting Youth) went one step further and organized a meeting at the gates of Las Ventas bullring to call upon Spain's authorities to take legal action against people on Twitter who wished death upon the injured matadors.

"Of course freedom of expression exists, but its freedom ends where ours begins and we will not let them step on us time and time again with impunity," they declared, according to Spanish daily La Información.

Many tweets in English from international Twitter users after news broke of the events at Las Arenas were mocking in tone:

Bulls 3 Matadors 0: 'World Series' bull fight is cancelled for first time in 35 years after … – good it is an evil sport!

Spanish reactions were also generally less than sympathetic towards David Mora, the most seriously injured matador:

"When a bull gores a bullfighter people hold their head in their hands, when the bull dies they applaud! #DavidMora I am not sorry."

"If the bullfighter doesn't deserve to die, why does the bull? I'm ashamed of this country."

"I think the best thing about bullfighters dying is that more bullfighters will replace them and then they can die too."

Others were more succinct:

"I'm not at all sorry for bullfighters who are injured in the arena. F**k them."

While some praised the crackdown, others viewed it as an attempt to silence free speech about a political figure widely viewed as controversial, and a futher attempt on the part of the government against criticism.

Several people have subsequently been arrested for making offensive tweets about the Carrasco case.

Bullfighting has been on the decline for years in Spain, with a 2010 survey in El Pais showing 60 percent of respondents opposed the practice.

Barcelona's ring held its final bullfight in September 2011 after the Catalonia region banned bullfighting, the second Spanish region to do so after the Canary Islands.