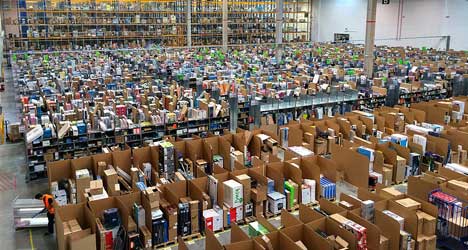 Although Amazon already sold shoes, accessories and jewellery in Spain, it had not until this week offered the full range of fashion available to its 35 million clothing customers in the UK, USA, Germany, France, Japan, China and Italy.

The expansion is a strong statement of intent from Amazon and comes on the heels of reports that the company plans to open a vast, 151,000 square metre distribution centre in Barcelona to meet rising demand for its services in Spain.

Spaniards have traditionally been slow to adopt online shopping habits but Amazon's expansion is a sign that things could be changing.

"The clothes shop that we've launched today is the fifteenth line that we've opened since we started Amazon.es just over two-and-a-half years ago," said François Nouys, CEO of Amazon Spain, according to Spanish daily Cinco Días.

Clothing is one of the fastest-growing areas of business for Amazon in the UK and the company wants to replicate that success in Spain.

"Out shelves are unlimited, so we can offer a huge range of styles and sizes," said Sergio Butcher, Vice President of Fashion for Amazon EU.

The company announced that shipping will be free for orders over €19 ($26), and returns will also incur no additional cost.

Amazon has achieved undeniable international success but also a great deal of criticism.

Its 9,000 employees in Germany went on strike several times in 2013 in a bid to bring their pay in line with average wages in the distribution sector.

Its European fiscal residence in low-tax Luxembourg has also led to complaints that it does not pay taxes in the UK and other EU countries where it operates.