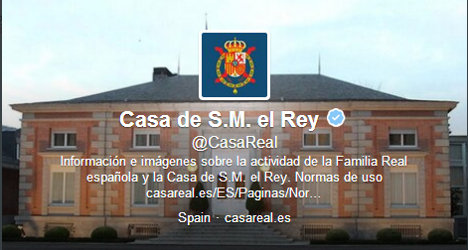 People hoping the royal Twitter account will reveal Spanish King Juan Carlos' innermost thoughts on life, the universe and everything are in for a let-down. Photo: Twitter

The royal Twitter account with the handle @casareal went live shortly after 12pm on Wednesday, containing a greeting in Spain's four official languages — Castellano, Catalan, Basque and Galcian — and English.

The aim of the account is to "inform users" about the day-to-day activities of the royal family,  the palace said in a statement.

But people hoping to find out Spanish King Juan Carlos' innermost thoughts on life, the universe and everything are in for something of a let-down: "This is an institutional profile and is not personal nature at all," say the account's operators in their rules of use document.

Those rules also ask users to mind their manners when commenting on royal tweets, reminding them that politeness is required.

Offensive comments, trolling and spamming are also strictly out of bounds as the Zarzuela Palace enters the Twittersphere.

The @casareal Twitter account is the latest phase in the long-running process of getting Spain's royals online. In 2012, the palace unveiled a new website, and recenlty a children's area of the site became available with interactive games and a photo family of the royal family.

By opening a Twitter account, the Spanish royals have caught up with the Britain's Queen Elizabeth II who keep royal watchers informed via @BritishMonarchy. Her son Prince Andrew also has his own account (@TheDukeofYork) while Prince Charles uses @ClarenceHouse.

In Sweden, Princess Madeleine has her own phenomenally successful Facebook page, which has won her over 400,000 likes.

Since the scandal erupted 3 years ago, the popularity of the royal family has plummeted. A recent poll showed that 62 percent of Spaniards were in favour of the abdication of 76-year-old King Juan Carlos, while support for the monarchy in general fell to just under half.