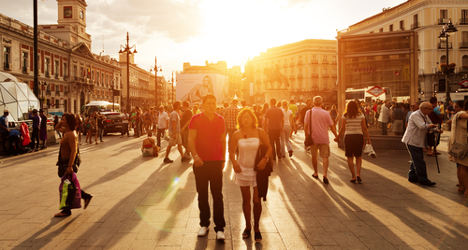 Photo of Madrid at sunset: Shutterstock

The number of permant immigrants arriving in Spain dropped to 275,000 in 2012, 22 percent lower than a year earlier.

That is less than half the number who came to Spain in 2007, or before Spain's economic crisis, the OECD figures show.

These figures represent part of a general decline in permanent migration to the EU, 12 percent lower in 2012, and on a downward trend since 2008.

SEE ALSO: Is now the right time for expats to leave Spain?

Germany, however, has bucked the trend to register a 38 percent rise from 2011 to 2012 alone, as its sturdy economy continued to attract workers.

Almost 400,000 people emigrated to Germany permanently in 2012, placing it ahead of Canada and the UK for the first time, according to the study called Migration Policy Debates.

The OECD defines permanent immigrants are people with indefinite residency, and EU citizens who had been living in the country for at least a year.

The OECD figures come a month after preliminary statistics from Spain's national statistics institute showed that the number of UK citizens officially registered as living in crisis-hit Spain dropped nearly 90,000, or 22.8 percent in 2013.