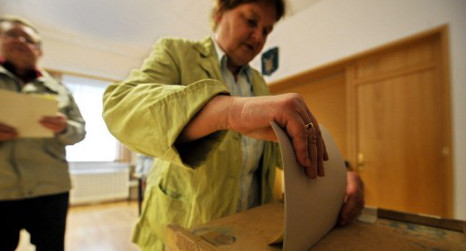 Politicians are all corrupt; Europe doesn't do anything for Spain; one vote doesn't make a difference; the reasons people are giving for not voting in the Sunday 25th European elections seem endless.

Indeed, results from the latest poll from El País newspaper predict a record-high abstention rate of 43 percent, and this is a country that has traditionally been more Euro-friendly than most.

Scandals centred around sexist comments from major candidates haven't helped, while many Spanish commentators have treated Sunday's vote as little more than a dry run for general elections in Spain coming up next year.  A poor performance by the country's chief opposition party, the socialist PSOE, could spell the end of their election chances, commentators are saying.

"It's been a poor campaign, and one that has been much too Spain-focused. The television debates have been bland and have lacked discussion of real European issues," Lucas Calvo, a candidate with Spain's centrist Union for Progress and Democracy party (UpyD) told The Local.

Calvo, who belongs to one of Spain's newest parties — it was founded in 2007 — believes there is another force at work here: "The big parties (the ruling PP and the opposition PSOE) don't actually want everyone to vote. They want their hardcore voters to come to the polls and for everyone else to stay home. That's the game they are playing," he argues.

"That's why you will see 55 percent of people not voting. And we should be worried about this. It's about protecting the status quo in Spain."

The candidate for the Europe-friendly UPyD believes there are other factors contributing to lack of voter interest, including a general lack of respect for Europe among Spain's political parties.

Traditionally these groupings have sent candidates to Brussels that they don't want in Madrid. Everyone knows this is the case and this takes away prestige from the EU.

On top of this is a general lack of knowledge about how Europe works. "Spanish children aren't taught about the essence of Europe at school. They learn about the Visigoths but they don't know about the Maastricht Treaty (which established the European Union and paved the way for the single currency)."

Calvo says it is a massive challenge to get people to vote — not just for his party — but in general.  "We need to make people interested in Europe. It is really affecting us. A lot of things happening in Spain have to do with Europe."

He points out that a lot of the economic development in Spain in the past 20 years has been thanks to funds from Europe, and highlights the increased freedom of movement Europeans now enjoy.  "Thanks to Europe, Spain's young unemployed people at least have the option to look for work abroad, whether that's to Germany or to London.

Sometimes we don't realize what Europe has done for us. It's only two decades since the Berlin Wall came down, and we had a war in former Yugoslavia in 1992. This is still the recent past."

But all too often Europe serves as something of a scapegoat, according to the young candidate.

When it comes to the question of austerity, for example, it is easy for the Spanish government to say those policies have been directed by the so-called 'troika' of the European Commission, the European Central Bank and the International Monetary Fund.

"At the end of the day what Europe says you have to have a deficit of six percent but they don't say where any cuts have to be made. It doesn't mean cuts have to be made in education or health. It's about not spending more than the country is creating," he says.

In this case, Europe is a convenient excuse for the government to make the budget cuts it wants, he believes.

Calvo's party the UPyD have a fundamental problem with the general attitude to the European parliament, where the 28 countries sitting on the European Council scrap it out to see who gets more privileges and who gets more money. They would like to see a Europe with genuine legislative power and they want people to be able to vote for European President.

In the meantime, in 2014, for the first time ever, MEPs will have a say on who might become the next President of the European Commission, considered the EU’s most powerful office holder,with significant powers, including the ability to introduce new legislation.

The EU parliamentary groups have agreed that their choice of candidate for president will be drawn from the bloc that wins the most seats, which is where the voters come in. Although national governments have the ultimate say in choosing the president of the European Commission, in theory they are likely to chose the nominee put forward by parliament or risk a clash with parliament and a crisis of democracy.

The EU is also a vast organization made up of some 33,000 workers. But Members of European Parliament are the only EU officials directly elected by European citizens, so Sunday's elections are a chance for people to say who they want to be in charge.

"We need to vote to make the changes we want, and to get the Europe we need," says Calvo. "If we don't vote, we are never going to have a say. Nationalist parties like those we see in Greece or like Ukip in the UK are winning power because people aren't voting.

"If you want a say, you need to vote. And if you don't vote on Sunday, you are going to have more of the same in Spain.

"The vote is also a chance to punish corruption in Spain, and to send a message to the two large parties that things need to change."