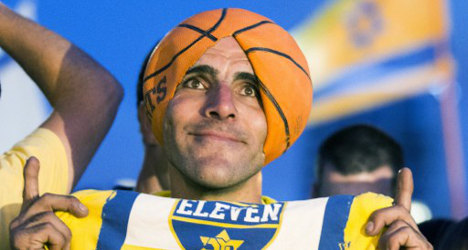 Twelve Jewish groups in the northeastern Catalonia region have lodged the legal complaint over the messages, which flooded onto the Twitter network after unfancied Maccabi's narrow win in the Euroleague final on Sunday.

Angry Spanish supporters created an expletive anti-Semitic hashtag in their messages after the match, which briefly became one of the most popular keywords on Twitter in Spain.

Ruben Noboa of the Jewish group Israel in Catalonia said he launched the lawsuit after seeing references in some messages to death camps and the mass murder of Jews in the Holocaust.

"When we saw reactions to Maccabi's victory such as 'Jews to the oven' or 'Jews to the showers', we decided to lodge this judicial complaint," Noboa told news agency AFP.

Eleven other Jewish associations have joined in his lawsuit, in which he presented copies of anti-Semitic tweets to state prosecutors, he said.

The associations singled out five people who were identified by their real names on Twitter, accusing them of "incitement to hatred and discrimination" — a crime punishable by up to three years' jail in Spain.

A recent report by the Anti-Defamation League, an international campaign against anti-Semitism, said Spain ranked third in Europe for prejudice against Jews, after Greece and France.

Jews have been scarce in Spain since their large communities were mostly expelled by Roman Catholic authorities in the late 15th century.

"Hardly anyone here knows any Jews, but the cliches and stereotypes persist and are also fed by Catholicism," said Noboa.

"I strongly believe in the freedom of expression, but there must be a limit," Jai Anguita of the Bet Shalom Jewish Community told Spanish newspaper El País.

"We could argue these comments are the result of high spirits after a defeat, that they are nearly jokes. But history has shown us where these jokes can lead."